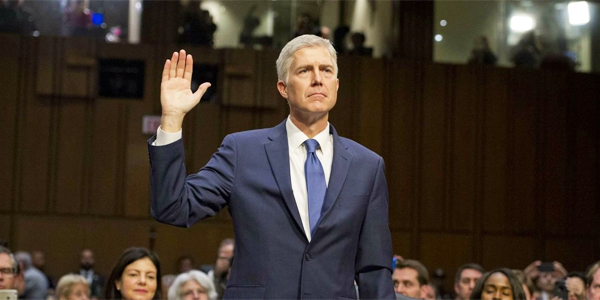 The Supreme Court's decision Monday to expand the definition of "sex" in the 1964 Civil Rights Act to include "gender identity" and "sexual orientation" means that homosexuals and transgenders now have special protections in employment.

"The ruling will lead to a tsunami of polarizing court cases and further degradation of Americans' natural rights to free speech, to free association, and to worshiping God as their consciences require," warns Joy Pullmann, executive editor of The Federalist.

"All this in the name of 'equality,' a word that has become a totalitarian weapon," she wrote.

Pullman called the decision "a disgrace to these bedrocks of Western civilization, our nation built upon them, the voters who vote for them, and to these men’s honor."

"President Trump ran promising judges who wouldn’t murder America, and [Justice Neil] Gorsuch just gave him and everyone who voted for him a giant middle finger," she said. "The court’s newfound weakness will also be exploited and explored by leftist legal agitators whose goal is the destruction of the American system."

She warned, "Get ready for years of legal battles."

Pullman explained that courts are not supposed to legislate "because citizens cannot consent to legislation imposed by courts, and have no direct means for altering Supreme Court decisions like we can alter laws through our elected representatives."

"When courts legislate, they disenfranchise the people," she said. "They invalidate our votes, our God-given natural right to rule ourselves. By adding words to statute that Congress did not put there, and has repeatedly and explicitly refused to add, these judges are destroying our Constitution, our way of life, the people’s sovereignty, and thus our human dignity."

She cited author Christopher Caldwell calling the Civil Rights Act the United States' second constitution, "which is at war with its first: the identity politics laws and regulations passed largely since the 1960s in the name of 'antidiscrimination.'"

Caldwell writes in "Age of Entitlement": "Just as assuming that two parallel lines can meet overturns the whole of Euclidean geometry, eliminating freedom of association from the U.S. Constitution changed everything. At the time, it wasn't obvious how 'extra rights' could destroy natural rights. But it is now."

The Washington Examiner reported social conservatives contend that one of the byproducts of the decision will be an end to women's sports and freedom of speech.

Justice Samuel Alito and two other justices dissented, charging the decision amounted to the court legislating from the bench.

Princeton professor Robert George online said the "legislation handed down by the court will have far-reaching consequences, including the eventual destruction of all-women’s sports."

"As I tell my students, and constantly remind myself, 'remember, when you sign on to a proposition you are signing on to all it logically presupposes and entails.'"

Alito said that by advocating for protections in employment, the majority justices were casting their lot with transgenders in disputes over locker rooms, women's sports, housing, religious employment, health care and freedom of speech.

Ed Whelan of the Ethics and Public Policy Center said it will take decades to settle the legal questions that the decision created.

And he told the Examiner women's sports now are doomed, noting its regarded as offensive to say a man cannot compete in women's sports.

"To allow that male to take part but to bar a male who IDs as male would also be discrimination on the basis of sex. So end to female-only sports."

"It is the end of women in sports and women’s rights to privacy. Thanks to the sexual revolutionaries on the court, our laws will refuse to distinguish men who say they are women from real women," she wrote.

She said the decision bears no relationship to the law, "nor to reality itself."

"The Supreme Court can distort the law, but it can’t change reality. If you’re born a man, you’ll remain one to your dying day, regardless of what you believe or do to your body," Morse said.

Michelle Cretella of the American College of Pediatricians, agreed with Morse.

"The Supreme Court ruled 6-3 against science, common sense and the bedrock of Western Civilization when it redefined ‘sex’ to include gender identity and thereby erased females from American law," she wrote.

"From the scientific point of view, sex is defined according to an organism's biological role in reproduction; it is an innate and immutable trait that is solely biologically determined. Thanks to the betrayal of conservative justices John Roberts and Neil Gorsuch, all Americans and American institutions (including churches) must pretend that sex is a mere state of mind that can be changed at will. This means that all Americans are now compelled by federal law to lie – compelled by law to speak and behave as though people are whoever or whatever they claim to be irrespective of the facts."

Russell Moore of the Ethics and Religious Liberty Commission also issued a warning to lawmakers, because they now "won't know what they are voting to pass – because words might change cultural meaning dramatically."

Pullman said, "Given all that has happened after Obergefell v. Hodges, which we were vociferously told was ridiculous to forecast — transgenderism immediately going mainstream, pushing religion inside the closet LGBT people were vacating, limiting people’s ability to freely express their faith and ideas, forcing education institutions to promote LGBT politics and behavior — it’s naive to think such scenarios will not quickly become reality as a result of this court decision.

"Queer theory is now reigning U.S. employment law. This means it must also dominate all institutions of higher education that are not explicitly religious, both public and private," she said. "Religious schools and homeschooling now offer the only potential safe haven to parents who don’t want their children indoctrinated to believe it’s awesome to amputate healthy penises and breasts. Even those options are under threat, and it will take oodles of litigation to work out the details."

And she advocated a response: "People need to frequently contact their representatives about this issue, and get on the email lists of state and national groups working on this issue — like Mass Resistance, the Hands Across the Aisle Coalition, the Americian Family Association, Family Research Council, 4thWaveNow, and Transgender Trend — to read up on this issue and take action on bills.

"All elected officials and candidates need to start being asked in public, on videos immediately posted to social media, why they aren’t doing anything to keep naked men from getting access to naked girls in showers, bathrooms, and locker rooms," she said.

Alito pointed out that more than 100 federal laws prohibit discrimination because of sex.