A few weeks ago, a Minneapolis police officer pressed his knee on the neck of George Floyd for several minutes, inhibiting his breathing and eventually causing respiratory arrest. This act was not a sanctioned police chokehold technique; it was, as virtually everybody agrees, police brutality. In the aftermath of this crime, President Trump signed an executive order, reported by the media to "limit" or "ban" the use of police chokeholds.

Among politicians and media commentators, there is much talk about chokeholds, but minimal actual knowledge or understanding. For example, House Speaker Nancy Pelosi laughably referred to a chokehold as a "lynching."

Since I have degrees in both paramedicine and nursing, as well as black belts in both judo and Shou Tsu Do kung fu, I would like to clarify the "chokehold" issue.

"Chokehold" is a very confusing term. By dictionary definition, "choke" and "strangle" both refer to compressing the trachea to cut off the airway. A true choke – often referred to as an "air choke" – involves something, usually a forearm, going directly across the subject's trachea, inhibiting his breathing. The trachea is made of hard rings of cartilage, and it does not compress easily without bruising or breaking.

A possible reason for police to use this hold could be to force the subject to focus only on the officer and his own breathing so that other officers can gain a more dominant position (a famous example would be the Eric Garner case). Air chokes are already prohibited in many police departments because of the danger of tracheal damage, airway compromise and even death.

The other type of "choke" is not truly a choke at all. This is what I will refer to as a "blood choke," also known as a "sleeper hold," and often taught in law enforcement as "LVNR" or lateral vascular neck restraint. It can be applied in multiple ways, but if using the "rear naked choke" (one of the most common techniques), the forearm and bicep each compress one of the subject's carotid arteries, leaving room in the crook of the elbow for the subject's trachea. Therefore, if performed correctly, the subject's breathing is unaffected. Compression of the carotid sinuses in the neck may also activate the vagus nerve.

This is the same nerve that is activated when some people "faint" from seeing their own blood. Essentially, these two mechanisms (vagal nerve stimulation and cerebral blood flow interruption) cause the subject to pass out within a few seconds, with no harm done to his trachea or breathing.

Once the hold is released, the subject wakes up in about five to 20 seconds. In police work, that time could allow an officer to cuff the suspect and gain a position of control without risking any more harm to anyone. In comparison to other tools at police disposal – a baton, Taser or handgun – many consider a blood choke to be a much safer method of forcing submission.

I have personally used both air chokes and blood chokes (and had them used on me) hundreds of times, either in sparring or in tournaments. Believe me when I say there is a monumental difference between an air choke and a blood choke. Air chokes cause you to cough, panic and think about nothing but the arm across your throat. Blood chokes cause your vision to narrow and make you fall almost peacefully to sleep, without pain or difficulty breathing.

Virtually all news reporting on President Trump's executive order involves over-generalizations and misinformation. Many report that the order "ends" police chokeholds. But the actual text of the order restricts the attorney general's authorizing funding to law enforcement agencies based on certain criteria, including: "(ii) the State or local law enforcement agency's use-of-force policies prohibit the use of chokeholds – a physical maneuver that restricts an individual's ability to breathe for the purposes of incapacitation – except in those situations where the use of deadly force is allowed by law."

Every news story glosses over the most important part – the definition: "a physical maneuver that restricts the individual's ability to breathe." The wording clearly refers to an air choke, and not the more common and safer "blood choke."

The problem lies in public perception. When an officer's arm goes around a subject's neck, those not trained in medicine or combat reasonably assume he is restricting the subject's airway, when in fact this is usually far from the truth. It is unrealistic to assume, in an age of widespread armchair-quarterbacking of law enforcement's split-second decisions, that anyone in power would take the time to differentiate between a blood choke and an air choke.

Bottom line: This executive order, if followed accurately, doesn't really alter current best practices of law enforcement. However, if and when it is misinterpreted by those who don't understand chokes – especially when politics and outraged mobs demand a certain outcome – it could easily destroy an officer's life or defund a police department without cause. 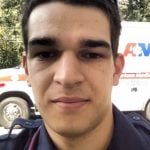 Joshua Kupelian
Joshua Kupelian is a practicing paramedic and martial artist who lives in the Pacific Northwest.
The surprising truth about 'chokeholds'
See more...