Amid widespread condemnation of Drew Brees' objection to the controversial national anthem protests, former NFL coach Tony Dungy, known for his outspoken Christian faith, took aim at the cancel culture of the current age that shuts down dialogue.

"I don't downgrade Drew for that. That’s what he said. He may not totally understand, it may have been not exactly how he wanted to express it, but he can’t be afraid to say that," Dungy said in an interview Thursday with "The Pat McAfee Show" podcast.

"And we can’t be afraid to say 'OK, Drew, I don’t agree with you but let’s talk about this.’ We can't just say anytime something happens that we don’t agree with, ‘I’m done with that, and I’m done with this person.’ That doesn’t make sense. We have to be better than that," said Dungy, a member of the Hall of Fame who won a Super Bowl coaching the Indianapolis Colts and another with the Tampa Bay Buccaneers. 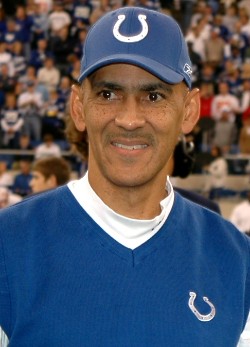 Brees was asked in an interview Wednesday with Yahoo Finance his thoughts about Colin Kaepernick's national anthem protests in light of the nationwide protests over the universally condemned actions of Minneapolis police officers in the death of a 46-year-old black man, George Floyd.

The NFL star, a certain future Hall of Famer, said he would "never agree with anyone disrespecting the flag."

"We still have a long way to go. But I think what you do by standing there and showing respect to the flag with your hand over your heart, is it shows unity," he said. "It shows that we are all in this together, we can all do better and that we are all part of the solution."

After the backlash, Brees issued an apology Thursday morning on his Instagram account, saying his comments were "insensitive and completely missed the mark on the issues we are facing right now as a country."

"I would like to apologize to my friends, teammates, the City of New Orleans, the black community, NFL community and anyone I hurt with my comments yesterday," he said. "In speaking with some of you, it breaks my heart to know the pain I have caused."

Meanwhile, all-time NFL great Jim Brown – known for his civil-rights activism – said Tuesday in an Associated Press interview that he won't kneel during the playing of the national anthem and "will always respect the flag."

"I am not going to denigrate my flag and I'm going to stand for the national anthem. I'm fighting with all of my strength to make it a better country, but I don't think that's the issue. Because what is the top side? Are you not going to stand up? This is our country, man," said Brown, 84.

Later Thursday, Brees apologized again, this time in a video posted on Instagram in which he promised to work for change.

“I know there’s not much I can say that would make things better right now, but I just want you to see in my eyes how sorry I am for the comments I made yesterday," Brees said. "I am sorry, and I will do better, and I will be part of the solution, and I am your ally."

Step-by-step you will see my heart for exactly what it is and the way everyone around me sees it. I’m sorry it has taken this long to act and to participate in a meaningful way but I am your ally in this fight.

Brees and his wife, who also are outspoken Christians, donated $5 million to the state of Lousiana in March to help families impacted by the coronavirus lockdown.

Denver Broncos coach Vic Fangio also issued an apology this week after saying he "didn't see racism in the NFL."

"After reflecting on my comments yesterday and listening to the players this morning I realize what I said regarding racism and discrimination in the NFL was wrong," Fangio said in a statement Wednesday. "While I have never personally experienced those terrible things first-hand during my 33 years in the NFL, I understand many players, coaches and staff have different perspectives."

He drew criticism for saying in a session with local media on Tuesday "our problems in the NFL along those lines are minimal," referring to race.

"We're a league of meritocracy. You earn what you get, you get what you earn," he said. "I don't see racism at all in the NFL, I don't see discrimination in the NFL. We all live together, joined as one, for one common goal, and we all intermingle and mix tremendously."

Kaepernick said in a tweet one week ago, after days of protests, that civility had run its course, and revolution is "the only logical reaction" to the death of George Floyd.

"When civility leads to death, revolting is the only logical reaction," Kaepernick tweeted.

Kaepernick has said the anthem demonstrations were in protest of an alleged systemic, racially motivated campaign by white police officers to harass and kill African-Americans.

He began in the preseason of 2016 by sitting down during the national anthem before a game, later explaining he was "not going to stand up to show pride in a flag for a country that oppresses black people and people of color."

"There are bodies in the street and people getting paid leave and getting away with murder," he told media.

However, former civil rights activist Bob Woodson is among many black activists and scholars who reject the claim of systemic racism.

And numerous studies support his view.

An August 2019 study in the Proceedings of the National Academy of Sciences, for example, found "no significant evidence of antiblack disparity in the likelihood of being fatally shot by police," Manhattan Institute scholar Heather Mac Donald noted in a Wall Street Journal column Tuesday. In 2015, under President Obama and Attorney General Eric Holder, a Justice Department analysis of the Philadelphia Police Department found white police officers were less likely than black or Hispanic officers to shoot unarmed black suspects. In 2016, the Washington Post reported a Washington State University study finding that police officers are three times less likely to shoot unarmed black suspects than unarmed white suspects.

African-American scholar Shelby Steele, who grew up in the segregated South, wrote in a recent Wall Street Journal column that while there is still racism in America -- because it's "endemic to the human condition, just as stupidity is" -- the U.S. has come to a point where racism "has become anathema and freedom has expanded."

In January, Kaepernick protested the U.S. drone killing of Iranian terrorist mastermind Qassem Suleimani, charging that the American "imperialism" behind the action is also displayed in the treatment of blacks.

"There is nothing new about American terrorist attacks against Black and Brown people for the expansion of American imperialism," he wrote on Twitter.

Kaepernick wrote in another tweet: "America has always sanctioned and besieged Black and Brown bodies both at home and abroad. America militarism is the weapon wielded by American imperialism, to enforce its policing and plundering of the non white world."

Earlier this week, in a lengthy post on Twitter, Dungy called on Christians to humbly take initiative in promoting unity, urging them to recognize who the real enemy is.

"Today we are a divided country," he wrote. "We’re divided racially, politically and socio-economically. And Satan is laughing at us because that is exactly what he wants. Dysfunction, mistrust and hatred help his kingdom flourish."

He said it has to start "with those of us who claim to be Christians."

"We have to come to the forefront and demonstrate the qualities of the One we claim to follow, Jesus Christ. We can’t be silent," he said.

"But we can’t go forward with judgmental, bitter spirits. We need to be proactive, but do it in the spirit of trying to help make things better."

He said it can't be only African-American churches. All churches must commit to saying, "We are going to be on the forefront of meaningful dialogue and meaningful change."

Dungy quoted from the Bible: "Do not be overcome by evil, but overcome evil with good."

He said that as he and his wife were driving in Florida they witnessed protests, describing it as "an emotional ride."