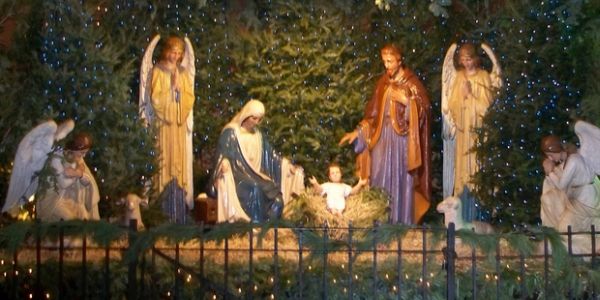 The Knights of Columbus organization is suing the Delaware town of Rehoboth Beach for banning a Christmas Nativity.

First Liberty Institute and its affiliated lawyers filed the action alleging religious discrimination for the town's "blanket ban" on the creche.

"The Knights of Columbus simply wants to continue a beloved tradition of this town," said Roger Byron, senior counsel for First Liberty Institute. "It is perfectly lawful to have a crèche on public property, and blatantly unlawful to ban it."

The institute explained that for decades, "a free-standing crèche has been part of the Christmas holiday tradition in Rehoboth Beach."

"The primary location for Christmas displays is the circle at the city bandstand and adjacent boardwalk, and traditional displays include a crèche, a Christmas tree, holiday lights and light displays, and a large Santa's House."

The lawsuit alleges: "The city’s policy of prohibiting religious messages on public property – both facially and as applied – constitutes viewpoint-based discrimination in violation of the Free Speech Clause of the First Amendment. By prohibiting private organizations from displaying religious holiday messages on city property, while simultaneously allowing private organizations to display secular holiday messages, defendants’ policy facially discriminates against religious viewpoints in violation of the First Amendment."

The Knights of Columbus notes that, as members of the city community, they wish to "participate in the decades-long tradition of displaying both religious and secular displays at the city's bandstand circle."

The filing explains the Nativity probably has been displayed regularly in the town since the 1930s. And the organization explains it has not been made aware of a single complaint in those eight decades.

The issue is that the city is imposing different limits on different groups. For groups such as the Chamber of Commerce, holiday displays still are permitted.

But not the faith-linked display from the Knights of Columbus.

The city wanted the religious symbols put up half a mile from the town's holiday focal point.

That violates the First and Fourteenth Amendments, First Liberty contends.

"The court should enjoin the city's anti-religion policy and compel the city to allow the Knights of Columbus to display the creche and participate in the community's decades-long tradition of secular and religious displays at the bandstand circle during the Christmas season in the same manner and with the same opportunities as other private groups."

The case seeks an injunction and judicial determinations but only nominal damages.