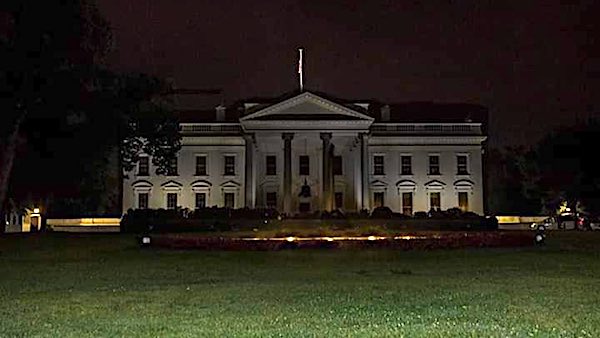 Democrats have launched yet another Twitter attack on President Trump.

But this time the blow landed on Barack Obama.

It happened when Rep. Debbie Mucarsel-Powell posted an image of the White House with the lights out.

"History will remember the night the president cowered in the dark as his country burned for justice," she wrote.

Hillary Clinton joined in, juxtaposing the image with another of the White House illuminated with the LGBT rainbow colors when Obama was president.

However, the Associated Press reported the image of the darkened White House was from 2015 when Obama was president.

It was posted to a stock image site before Trump took office.

One Twitter user pointed out not only that the image was from 2015, it had been altered. Some of the lights were digitally removed.

So will Hillary Clinton delete this deceptive viral tweet since it has been proven that the dark image of the White House on the right is both (1) photoshopped to make it darker than it really was ***and*** (2) is a picture from 2015?https://t.co/UzD0u0h9VZ https://t.co/70aFkuPE9F

"Perfect symbolism. If ever the country needed the occupant of the White House to shed light, and not heat, now is the time. Sadly, the lights are out," he tweeted.