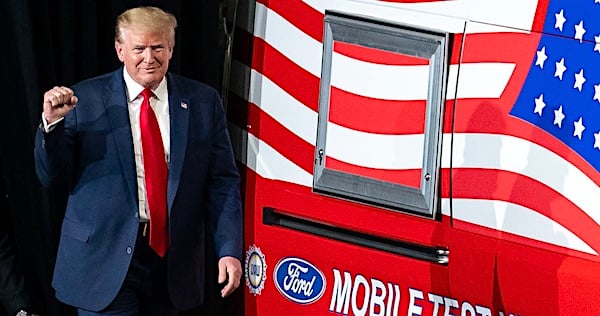 Americans now have what a team of constitutional experts is calling a new Bill of Rights.

It comes in an executive order from President Trump that imposes 10 principles of "fairness in administrative enforcement and adjudication" for processes that agencies and bureaucrats use to administer the laws of the land.

They are dubbed by the Pacific Legal Foundation the "Regulatory Bill of Rights."

"If properly implemented, the 10 principles in the Regulatory Bill of Rights will go a long way toward ensuring the due process protections that Americans rightly expect and should always receive from federal agencies," said Todd Gaziano, director of the Center for the Separation of Powers at Pacific Legal Foundation.

"The president’s order is an impressive statement of ideals that should guide agencies to revise decades of unfair regulatory procedures and practices that violate core constitutional rights."

The organization for decades has defended Americans who have been targeted by those administrative rules and practices.

The PLF notes the order requires "all agencies to revise their enforcement procedures and practices to conform to these principles."

"While we are excited that the administration took our recommendations seriously, it now falls on the individual agencies and the OMB to change their current practices to conform to the principles the president has reaffirmed," Gaziano said. "PLF will continue to fight until the aspirational goals of the Regulatory Bill of Rights become a reality."

The organization has released a report outlining some of the battles it has waged against the more egregious cases.

"Federal bureaucracies are designed and driven to pursue their narrow missions, be it regulating education, economic activity, or the environment. Even if well-intentioned, agencies' myopic focus on their own regulations, policies, and objectives, as well as the documented tendency of bureaucracies to expand their own power and personnel, leads them to give short shrift to the fundamental value of individual liberty – as many Pacific Legal Foundation clients can attest."

It profiled the lawsuit Mike and Chantell Sackett brought against the EPA for declaring a residential lot in a subdivision near Priest Lake, Idaho, where they planned to build a home a "federal protected wetlands."

The agency's threats included hundreds of thousands of dollars in fines.

Months later, the EPA claimed the lot was "navigable water" and gave the Sacketts no opportunity to challenge the designation.

It took fighting in the courts – including the U.S. Supreme Court – until 2020 before the EPA finally withdrew its orders and removed the crushing fines.

That case was littered with due process deficits, unreasonable fine threats and even the attempt by regulators to deny the Sacketts access to the court system. PLF said.

"The erosion of the Constitution's separation of powers in favor of the regulatory state may be the greatest threat to our liberty today," the legal group said. "Rather than our elected representatives in Congress writing the laws that bind us, seemingly unlimited power to write and enforce regulations has been delegated to and is wielded by obscure and unaccountable bureaucrats.

"Rather than courts serving as the neutral protector of our rights when these bureaucracies question or challenge our behavior, the judiciary places a heavy thumb on the scales of justice in favor of the overreaching agencies," the report said.