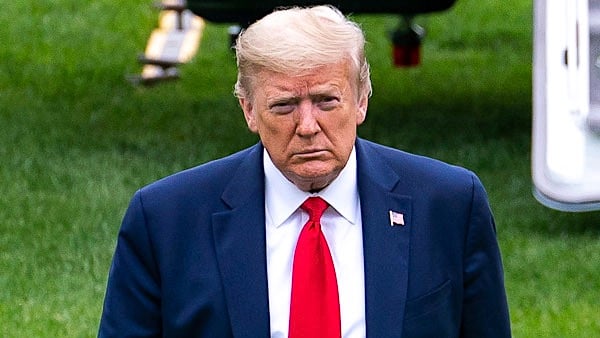 Democratic Gov. Tim Walz said last week after Minneapolis became engulfed in rioting in response to the death of a black man in police custody that "systemic racism must be addressed if we are to secure, justice, peace and order for all Minnesotans."

President Trump, as have the vast majority of Americans, has strongly condemned the police officer who put his knee on the neck of 46-year-old George Floyd one week ago for more than eight minutes amid cries of "I can't breathe."

Officer Derek Chavin faces a charge of third-degree murder, but the country is fiercely divided over whether his actions are reflective of a fundamentally racist system or an anomaly.

"He fundamentally rejects the idea that these egregious actions of these four Minnesota officers are representative of our police force as a whole," McEnany said.

"Most of our officers in this county are good, hardworking men and women who work every day to police their streets."

During the Republican primary of 2016, she noted, Trump spotlighted the death of Sandra Bland in a Texas jail, and his administration is investigating the recent cases of Ahmaud Arbury in Georgia as well as Floyd.

"He recognizes these injustices," she said. "He puts a focus on them, but he also recognizes our valiant police officers who have taken to the streets each and every night over the last six nights and protected our communities."

Shelby Steele, a senior fellow at Stanford University's Hoover Institution, is one of many black scholars who experienced systemic racism in his youth but believes America has changed for the better.

In his book "Shame: How America's Past Sins Have Polarized Our Country," he  recalled that in his early 20s, he adopted a "victim-focused" identity.

Such identities, which emerged in the 1960s, he wrote, "are premised on a belief in the characterological evil of America and the entire white Western world."

"Once America's evil became 'poetic' (permanently true), the formerly oppressed could make victimization an ongoing feature of their identity — despite the fact that their actual victimization had greatly declined," Steele wrote.

He wrote that the "charge of evil against the white West is one of the largest and most influential ideas of our age — and this despite the dramatic retreat of America and the West from these evils."

"The scope and power of this idea—its enormous influence in the world—is not a measure of its truth or accuracy; it is a measure of the great neediness in the world for such an idea, for an idea that lets the formerly oppressed defend their esteem, on the one hand, and pursue power in the name of their past victimization, on the other," he wrote. "It is also an idea that gave a contrite white America (and the Western world) new and essentially repentant liberalism."

After a trip to Africa in 1970 to explore his roots, he said, he "learned that America, for all its faults and failings, was not intractably evil."

He said, look back many years later, he considers himself "lucky."

"After one of my radical kitchen-table rants against America toward the end of the 1960s, my father — the son of a man born in slavery — had said to me: 'You know, you shouldn’t underestimate America. This is a strong country,'" Steele wrote.

"I protested, started on racism once again. He said, 'No, it’s strong enough to change. You can’t imagine the amount of change I've seen in my own lifetime.'"