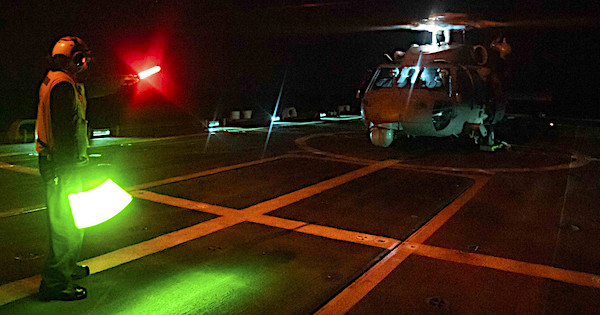 An MH-60S Seahawk helicopter prepares to take off from the flight deck of the littoral combat ship USS Detroit in the Caribbean Sea, May 26, 2020. (U.S. Navy photo by Mass Communication Specialist 2nd Class Anderson W. Branch/Released)

President Donald Trump vowed Monday to mobilize all federal resources against those who are rioting, looting, and destructing public property.

The president announced that he is taking “immediate presidential action” to restore both security and safety in America Monday evening at the White House as protestors began filling the streets of the nation’s capital once again.

“I am mobilizing all federal resources, civilian and military to stop the rioting and looting, to end the destruction and arson, and to protect the rights of law-abiding Americans, including your Second Amendment rights.”

“America needs creation, not destruction,” he said. “Cooperation, not contempt, security, not anarchy. Healing the hatred, justice, not chaos. This is our mission, and we will succeed 100%. We will succeed. Our country always wins.”

POTUS said he has strongly recommended that every United States governor deploy the National Guard “in sufficient numbers that we dominate the streets,” warning that if the state or city does not take action, Trump will deploy the United States military and “quickly solve the problem for them.”

The president also called the riots of Sunday night in Washington, D.C. a “total disgrace,” and said that he is dispatching “thousands of heavily armed soldiers, military personnel, and law enforcement officers to stop the rioting, looting, vandalism, assaults, and the wanton destruction of property.”

Washington, D.C.’s curfew will be strictly enforced, the president said, and anyone who threatens innocent life or property “will be arrested, detained, and prosecuted to the fullest extent of the law.”

POTUS emphasized that all Americans are “rightly sickened and revolted by the brutal death of George Floyd” and that his administration is committed to obtaining justice for both Floyd and his family.

“He will not have died in vain,” the president said.

But Trump also noted that “the destruction of innocent life and the spilling of innocent blood is an offense to humanity and a crime against God.”

“I take these actions today with firm resolve and with a true and passionate love for our country,” POTUS said. “By far our greatest days lie ahead.”