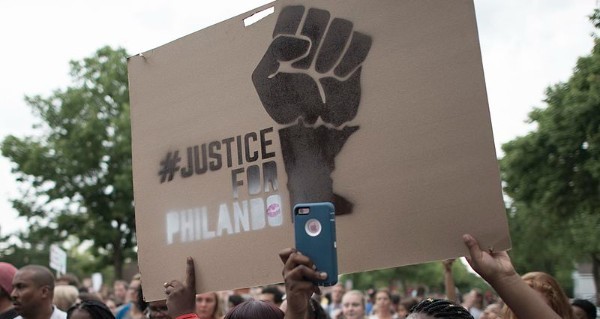 Over the weekend, something unprecedented happened in America.

"A small group of highly aggressive emotionally charged activists took over our culture. They forced the entire country to obey their will. It all happened so fast and with such ferocity that virtually no one resisted it," said Tucker Carlson on his Fox News show Monday night.

He was referring to the breathtaking pace at which "statements of fact and opinion that were entirely within the bounds of reasonable conversation" became "enough to get you fired from your job."

Within just one week, he said, the new rule has become: "You are not allowed to question Black Lives Matter in any way."

The radical organization is not about "black lives," it's a "political party, maybe the strongest political party in the United States," Carlson said.

"Its members believe they can reshape this country and so far, they're proving to be right."

Over the past week, BLM's wildly irrational chief policy prescription, "defund police," has gained traction among some Democratic leaders.

The president of the Minneapolis City Council, Lisa Bender, told CNN anchor Alisyn Camerota on Monday that the belief that citizens should be able to call the police if someone breaks into their home "comes from a place of privilege because for those of us for whom the system is working."

"I think we need to step back and imagine what it would feel like to already live in that reality, where calling the police may mean more harm is done," Bender said.

"The demand of defunding law enforcement becomes a central demand in how we actually get real accountability and justice, because it means we are reducing the ability of law enforcement to have resources that harm our communities," she told Boston NPR station WBUR.

"[Police officers] taking a knee is not stopping the deaths of our community members," she said. "We need transformation. These things don’t happen through police taking a knee at protests and then right after they take a knee, getting up and tear-gassing us and rubber bulleting us and beating us with batons."

Black Lives Matter has 13 guiding principles that include being "committed to fostering a queer‐affirming network" and "freeing ourselves from the tight grip of heteronormative thinking."

The group is also committed to "doing the work required to dismantle cis-gender privilege and uplift Black trans folk, especially Black trans women who continue to be disproportionately impacted by trans-antagonistic violence."

Significantly, with many black leaders saying the biggest problem they face is fatherless homes, Black Lives Matter is against the "Western" idea of the nuclear family, preferring a collectivist authority over children.

"We are committed to disrupting the Western-prescribed nuclear family structure requirement by supporting each other as extended families and 'villages' that collectively care for one another, and especially 'our' children to the degree that mothers, parents and children are comfortable," the organization says.

On Saturday, the liberal mayor of Minneapolis, Jacob Frey, made the mistake of putting himself in a position where he could be asked directly by activists his position on defunding police.

Carlson ran a video of a female activist looking down to Frey from a stage asking, "Yes or no, will you commit to defunding Minneapolis Police Department?"

Frey asked for clarification: "The abolition of it?"

The activist replied: "What did I say? We don't want no more police."

Frey said he does "not support the full abolition of the police department."

The activist responded: "[Expletive]. You're wasting our time. Get the [expletive] out of here."

Instead of confronting the activist, Carlson said, Frey "slunk away like a child caught doing something filthy."

The most telling moment, he said, was when the activist threatened to defeat Frey in the next election, confirming that BLM is in fact a political party.

"You can always tell which political movements are ascendant, which are headed up, by how straightforward their members and sympathizers are about what they believe," he said. "Strong people say what they think out loud. They have no reason not to. They're not embarrassed about their beliefs. They think they're winning."

Carlson pointed out that Minnesota's attorney general, Keith Ellison, now is arguing it's wrong for police to bring guns to domestic violence calls.

The Fox News host warned that while Ellison is considered a radical, it's easy to imagine him becoming attorney general of the United States if Joe Biden is elected president.

"Again, all of this probably strikes you as wild-eyed craziness, flat Earth stuff. Eliminate the police? Really? But things change fast. Look how quickly they changed just over the weekend."

Carlson said defunding the police is "a move toward authoritarian social control, cloaked in the language of identity politics."

He offered examples of the new rule that Black Lives Matter cannot be questioned in any way.

Last Tuesday, Marjorie Greene, a congressional candidate in Georgia, posted a video ad on Facebook that the social media company pulled down within two days.

Armed with a rifle, she said: "I have a message for Antifa terrorists. Stay the hell out of Northwest Georgia. You won't burn our churches, loot our businesses or destroy our homes."

"So, Facebook has a policy against violence -- not the violence engulfing our cities, but the violence of you defending your family," Carlson said. "They create the chaos, you're not allowed to defend yourself. You are, in other words -- and this is, of course, the point -- wholly dependent upon them."

In Vancouver, Canada, a men's basketball coach was fired for liking a tweet that questioned Black Lives Matter. And a player for a Major League Soccer team, the Los Angeles Galaxy, was fired because his wife said something critical online.

"Imagine being a high school student right now. High school students who refuse to show affirmative support for Black Lives Matter on their Instagram accounts were shunned by their friends," he said. "Journalists who asked too many questions about the group were fired or silenced. Again, not an exaggeration."

The media were in on it as well, Carlson said, with the New York Times running an op-ed demanding that people disown family members who fail to support Black Lives Matter with enough enthusiasm.

"Tell your relatives, tell your friends," Carlson said. "You will not be visiting or answering phone calls until they take significant action in supporting black lives through protest or financial contributions."

He said that in "an environment like this, most people get the message very fast and the weak ones are quick to join in just like the good Red Guards they have always been underneath it all."

He pointed to a Black Lives Matter activist who admitted in an interview on Saturday he may soon incinerate people with gasoline.

The D.C. Chapter of the group released a statement attacking Bowser for not giving them complete control of the city's police department.

"This is to appease white liberals while ignoring our demands. Black Lives Matter means defund the police," BLM charged.

Carlson concluded his segment with some hope, reminding viewers that "truth is a defense."

"No matter what they're telling you at this moment, this moment will pass. Remember that. All moments do," he said.

"When it does, we will look back at what we just saw in horror and disbelief."