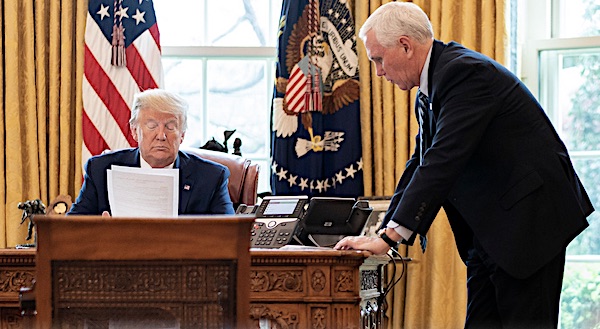 Fox News’ Tucker Carlson ripped into President Donald Trump, Vice President Mike Pence, and former ambassador to the United Nations Nikki Haley for their reactions to the violent riots throughout the United States.

The “Tucker Carlson Tonight” host warned that the United States of America is experiencing a profound national emergency — “but you would never know that from listening to the elected leaders,” he added, before citing examples of Pence, Haley, and Trump’s reactions to the riots.

“Almost all of them pretend this is not really happening, or if it is happening, it’s just part of America’s long tradition of vigorous political discourse,” Carlson said. “Politicians on both sides tell us this is all about the death of a man in police in Minneapolis custody last week. The people burning down our country are protesters and they’re engaged in a legitimate protest.”

“On Friday some American cities were being destroyed by mobs and the vice president of the United States refused to say anything specific on the riots we were watching on television,” Carlson said. “Instead, Mike Pence scolded America for its racism.”

The Tucker Carlson Tonight Host also criticized Haley for her comment that George Floyd’s death needs to be “personal and painful for everyone.”

“What Nikki Haley does best is moral blackmail,” Carlson said. “During the 2016 campaign she compared Donald Trump to the racist mass murder Dylan Roof. How is Donald Trump similar to a serial killer? Nikki Haley never explained that, she wasn’t trying to educate anyone. Her only goal was political advantage. Nikki Haley is exceptionally good and getting what she wants, she’s happy to denounce you as a racist in order to get it. She just did.”

“In this case, Nikki Haley’s wish came true. The riots were indeed “personal and painful for everyone.” And then the pain kept increasing and two days after she wrote that dozens of American cities have been thoroughly trashed and some destroyed,” he said.

Carlson also criticized Trump’s response to the riots, noting that after riots raged outside the White House and a Fox New reporter was forced to flee, the president tweeted to assure the nation that he and his family were safe.

“The first requirement of leadership is that you watch over the people in your care,” Carlson said. “That’s what soldiers want from their officers, it’s what families need from the fathers. It’s what voters demand from their president. People will put up with almost anything if you do that.”

“But if you do not protect them or worse than that, if you seem like you can’t be bothered to protect them, then you are done. It’s over. People will not forgive weakness, that’s the one thing. By the way that’s not a partisan point, it’s human nature.”

Carlson praised Trump for his Monday vow to use the military if governors don’t deploy the national guard to stop riots, as well as Trump’s symbolic walk to St. Johns, a D.C. church set ablaze Sunday night.

“We fervently hope this all works,” Carlson said. “What Americans want most right now is the end to this chaos and they want their cities to be safe and they want this to stop immediately. If the commander-in-chief can’t stop us, he will lose in November and the left will blame him for the atrocities they encouraged and voters will agree.”