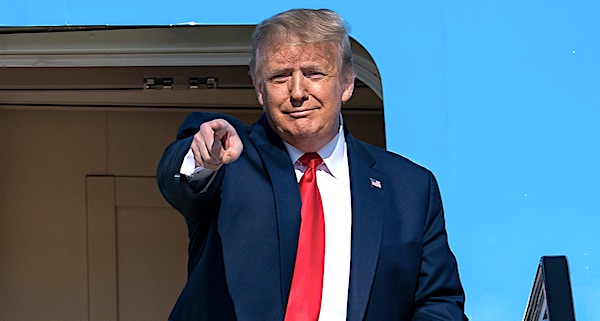 Twitter flagged a tweet from President Donald Trump Tuesday for warning activists that they will be met with “serious force” if they build an autonomous zone in Washington, D.C.

The social media platform explained the move in a tweet Tuesday, saying the president’s tweet violated Twitter’s policies against “abusive behavior, specifically, the presence of a threat of harm against an identifiable group.” The company noted that users can see the tweet, but will only be allowed to retweet with comments.

Trump’s tweet was apparently a warning to activists who are considering building a so-called autonomous zone near the White House. “There will never be an ‘Autonomous Zone’ in Washington, D.C., as long as I’m your President. If they try they will be met with serious force!” the president wrote in the since-flagged tweet.

The president composed his tweet after activists set up a “Black House Autonomous Zone” near the White House Monday.

This is the third time Twitter has acted against the president’s twitter profile in less than a month. The company censored a Trump tweet on May 29 after he called people rioting and looting in Minneapolis, Minnesota, “THUGS” and suggested that he would send in the military. He also added that, “when the looting starts, the shooting starts.”

Trump had referred to riots and looting that took place during demonstrations against the death of George Floyd, a black man who died May 25 after a former police officer kneeled on his neck for nearly 9-minutes, as a video recording of the incident showed.