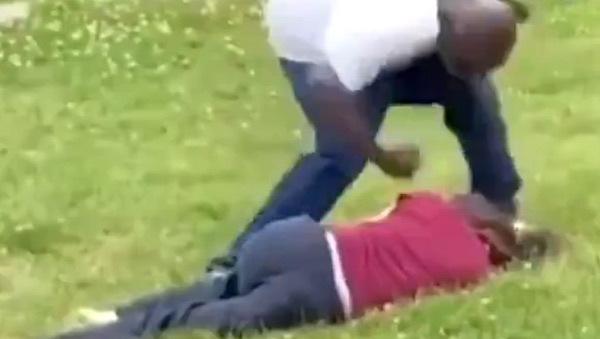 A video has emerged online of a black man pummeling a defenseless white woman on the ground.

But within minutes, another video shows, the black man was lying on the ground, moving his arms slowly and breathing heavily after a beating.

At the hands of other blacks.

The short video shows only the man's beating of the woman, but the video is graphic:

That portion was posted on Twitter by actor James Woods, who commented: "Quick. Call a social worker."

Another Twitter user linked to the WorldstarHipHop site where the longer video was posted. 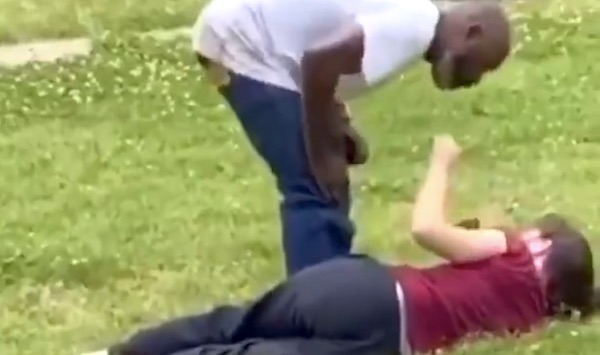 It shows the man eventually walking away from the woman and her getting up. Within a few seconds he reappears on screen, surrounded by a crowd.

Blows fly and the original attacker is on the ground almost immediately.

More blows follow, amid cries of "Not on camera."

The video closes with him on the ground:

See the video (Warning: offensive language and violence throughout):

There aren't any details about where the incident took place or the eventual outcome.

But some Twitter users went wild: "She had it coming!" said one. Another: "Was that black dude pimping out the white woman?"

Another said: "Hope the lady was taken to get her jaw examined. It took a hit where the jaw breaks very easy. Good to see some men come to and educate that coward on why you never hit a woman."

Yet another presented a whole discourse: "People are sick. He's sick and the guys who beat him up are sick. They should all be in jail. What he did to that woman is absolutely horrible but the guys who beat him up are just as bad if not worse. It would have been one thing to come to her aid while he was beating her but going after him after the fact instead of just calling the police was the wrong choice. This wasn't protection it was vengeance. And then continuing to beat him after he was unconscious...ugh. Nice cowardly act by the stud behind the camera to do nothing during the whole thing including just saying 'he's asleep' and laughing while the guy's lying there unconscious. Here's an idea...call 911. The whole thing is seriously messed up and there's not a single real man in the entire video."

Others blamed either the man or the woman, but the threat of violence didn't end on the screen.

"I would like to do that to you LUL," said one. "You're welcome to try," another responded.