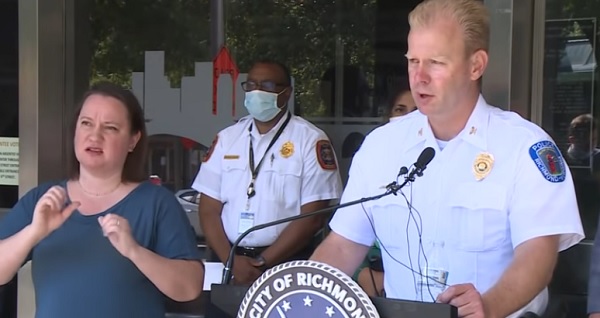 Amid countless acts of violence across the nation that have enveloped the protests of the death of a 46-year-old black man in Minneapolis, one stood out in Richmond, Virginia, moving the city's police chief to tears.

William Smith, at a news conference Sunday, recounted the burning of an occupied building by protesters who then blocked the fire department from access while a child remained inside.

"One incident that is particularly poignant, that truly illustrates the seriousness of the issues we’re facing," he began.

Smith said his officers had to force their way in to clear a path for the fire department.

"The protesters intercepted the fire apparatus several blocks away with vehicles and blocked that fire department's access to the structure fire," he said.

"Inside that home was a child."

The Gateway Pundit blog noted police were able to save the child.

But Smith pointed out there have been many injuries to protesters and rioters caused by the rioters themselves.

Most of the injuries have come from thrown bottles, rocks and bricks.

The police chief said that the turning of protests into riots was planned, and police are working on identifying the offenders and their motives.

"When you take a legitimate issue and hijack it for unknown reasons, that is unacceptable to me, to the Richmond Police Department, and the city of Richmond," he said.