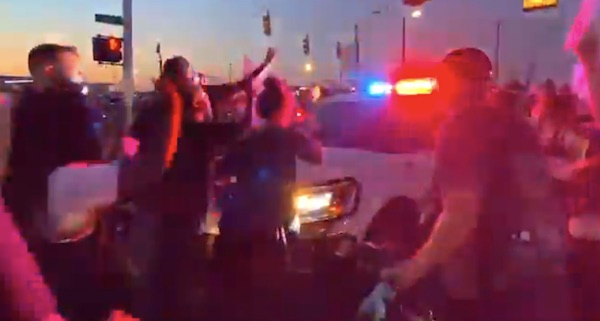 A Detroit police officer is seen driving into a crowd of protesters surrounding his car on Sunday, June 29, 2020 (Video screenshot)

A Detroit police SUV drove into a crowd of protesters Sunday evening after they surrounded the car, according to video of the incident shared on Twitter.

Protesters can be heard screaming as they chase the car. The incident sent multiple protesters to the hospital, according to Ketner.

Jae Bass, who claims he was one of the protesters thrown from the car, said that he had originally stood in front of it to separate the car from the other protesters.

“In response to that, he just floored it,” Bass told the Detroit Free Press.

“He went super fast. Me and a couple of other organizers that were with me, just went flinging off. We went flying off. He ran over a couple people’s arms, feet. He ran over her phone. I think I was the last person on the car. I was just holding onto the car. I could feel him speeding up and then he did one of these and he [flung] me off the car,” Bass said.

The Detroit Police Department did not respond to the Daily Caller News Foundation’s request to comment, but Detroit Police Chief James Craig said the department would address the incident at a press conference Monday afternoon Facebook page.

The incident is not the first clash between demonstrators and police, as protests sparked by the death of George Floyd, who died after a Minneapolis police officer knelt on his neck for nearly nine minutes, have led to high tensions and violence in cities nationwide.