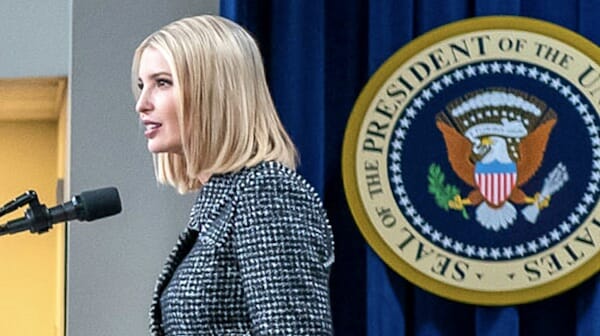 Women have reached a historic milestone under the Trump administration, for the first time making up half of the senior leadership of the National Security Council.

Madeline Osburn, a staff editor for The Federalist, writes that 12 of the 24 directorates are led by women.

That includes three of the six regional directorates that cover the world.

"While the White House press corps has not yet noticed that fact, and Vanity Fair didn’t have Annie Leibovitz come do a photo shoot, as would have been obligatory in the previous administration, women in the White House noticed and appreciated the historic first," she wrote.

In the report, Ivanka Trump, adviser to the president, said her father "has demonstrated his commitment to empowering women in the U.S. and across the world, implementing a pro-growth, pro-family agenda that lifts up women of all backgrounds."

"It’s no surprise that women are leading the way across the Trump administration, including more women leaders at the National Security Council than at any other time in history," she said.

Women now lead the NSC's operations regarding international organizations, border security and COVID-19 as well as the regions of Africa, Asia and South Asia.

The report noted policy staff had swelled from a dozen during the Cuban missile crisis to well over 200 in the Obama administration, which O'Brien said was far too large.

"Under President Trump’s leadership, over the past nine months we have brought the NSC back to its proper size and role as a lean and efficient advisory body, and we were able to make that happen because we have some of the strongest leaders in the history of the NSC, half of whom are women for the first time ever," O'Brien said in the report.

NSC members have praised the streamlining of the council, with Rebeccah Heinrichs, a scholar with the Hudson Institute, noting its "exceptionally capable people."

The Federalist report said the female NSC leaders include arguably the most important, Dr. Deborah Birx, the physician and diplomat serving as head of the coronavirus response. In February, O’Brien named her to the NSC, where she works on detail from the State Department.