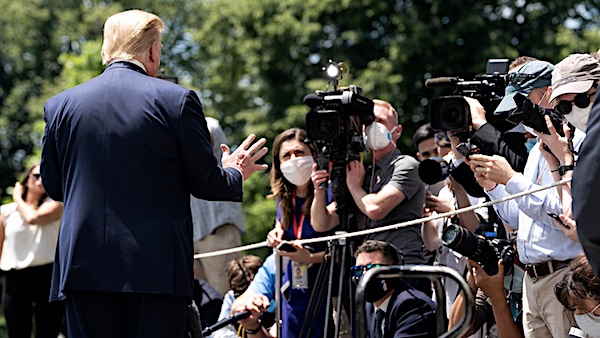 President Donald J. Trump takes questions from the press on the South Lawn of White House prior to boarding Marine One for Joint Base Andrews Maryland Saturday, May 30, 2020, for his trip to Cape Canaveral, Florida. (Official White House photo by Joyce N. Boghosian)

President Trump's press secretary pushed back Monday against claims the president has been "hiding in the bunker" amid the racial protests over the weekend in response to the death of George Floyd.

In the White House briefing room, Kayleigh McEnany insisted that along with speaking "continually" on the issue and delivering extensive remarks on television Saturday, the president has been focused on "action."

"This president has been leading. He met with generals yesterday," she said, referring to mobilization of the National Guard, which has been done by governors in 27 states.

"He is each and every moment taking another action to try to solve and resolve what we have seen in our streets," she said.

"Where the governors have failed, he has stepped in. He's acting. He is hard at work."

Noting that Trump literally was in the White House bunker amid violent protests outside in which 50 Secret Service officers were injured, a reporter asked whether Trump was going to appear on camera.

She called that concern a "misnomer in the media," saying it was "appalling some of the coverage I saw," including in the New York Times and the Washington Post.

She pointed to his televised news conference Saturday at the launch of the SpaceX rocket, arguing at least half of his remarks were about the Floyd case.

Press. Sec. Kayleigh McEnany: "This President has been leading." pic.twitter.com/NSiH8Rwj6Q

On Saturday, Trump called the death of 46-year-old George Floyd at the hands of a Minneapolis police officer who has been charged with third-degree murder "a grave tragedy."

"It should never have happened. It has filled Americans all over the country with horror, anger and grief," he said.

The president noted he spoke Friday with the Floyd family "and expressed the sorrow of our entire nation for their loss."

"Healing, not hatred, justice, not chaos, are the mission at hand."

He noted that all four of the police officers involved in the incident have been fired and one charged has been charged with murder so far.

"State and federal authorities are carrying out an investigation to see what further charges may be warranted, including against sadly, the other three," he said.

Trump also referred to the Justice Department's civil rights investigation of the Floyd case and his request that Attorney General William Barr expedite the process.

"I understand the pain that people are feeling. We support the right of peaceful protestors and we hear their pleas, but what we are now seeing on the streets of our cities has nothing to do with justice or with peace," Trump said.

"The memory of George Floyd is being dishonored by rioters, looters and anarchists. The violence and vandalism is being led by Antifa and other radical left wing groups who are terrorizing the innocent, destroying jobs, hurting businesses and burning down buildings."

The president said the "main victims of these horrible, horrible situations are the citizens who live in these once lovely communities."

"The mobs are devastating the life’s work of good people and destroying their dream," he said. "Right now, America needs creation, not destruction, cooperation, not contempt, security, not anarchy and there will be no anarchy. Civilization must be cherished, defended, and protected. The voices of law abiding citizens must be heard and heard very loudly."

We cannot and must not allow a small group of criminals and vandals to wreck our cities and lay waste to our communities. We must defend the rights of every citizen to live without violence, prejudice, or fear. We support the overwhelming majority of police officers who are incredible in every way and devoted public servants. They keep our city safe, protect our communities from gangs and drugs and risk their own lives for us every day.

No one is more upset than fellow law enforcement offices by this small handful who failed to abide by their oath to serve and protect. My administration will stop mob violence and we’ll stop it cold. It does not serve the interest of justice or any citizen of any race, color, or creed for the government to give into anarchy, abandoned police precincts, or allow communities to be burned to the ground, won’t happen.

Those making excuses or justifications for violence are not helping the downtrodden, but delivering new anguish and new pain. From day one of my administration, we’ve made it a top priority to build up distressed communities and revitalize our crumbling inner cities. We fought hard with Senator Tim Scott and many others to create opportunity zones, helping to draw a surge of new investment to the places in our country that need it most.

We must all work together as a society to expand opportunity and to create a future of greater dignity and promise for all of our people. We must forge a partnership with community leaders, local law enforcement and the faith community to restore hope. Radical left criminals, thugs, and others all throughout our country and throughout the world, will not be allowed to set communities ablaze. We won’t let it happen. It harms those who have the least, and we will be protecting those who have the least.

The leadership of the National Guard and the Department of Justice are now in close communication with state and city officials in Minnesota and we’re coordinating our efforts with local law enforcement all across our nation. In America, justice is never achieved at the hands of an angry mob. I will not allow angry mobs to dominate, won’t happen. It is essential that we protect the crown jewel of American democracy, the rule of law and our independent system of justice.

Every citizen in every community has the right to be safe in their workplace, safe in their homes and safe in our city streets. This is the sacred right of all Americans that I am totally determined to defend and will defend. My administration will always stand against violence, mayhem and disorder. We will stand with the family of George Floyd, with the peaceful protestors and with every law abiding citizen who wants decency, civility, safety, and security. We are working toward a more just society, but that means building up, not tearing down.

But that means building up, not tearing down, joining hands, not hurling fests, standing in solidarity, not surrendering to hostility. Moments ago as we went and just the launch of two great American astronauts into space, we were filled with the sense of pride and unity that brings us together as Americans. That same spirit, which powered our astronauts to the moon has also helped lift our country to ever greater heights of justice and opportunity throughout our history. So today, as we mark a renewed commitment to America’s future in space, a tremendous commitment it is. Let us also commit to a brighter future for all of our citizens right here on earth.