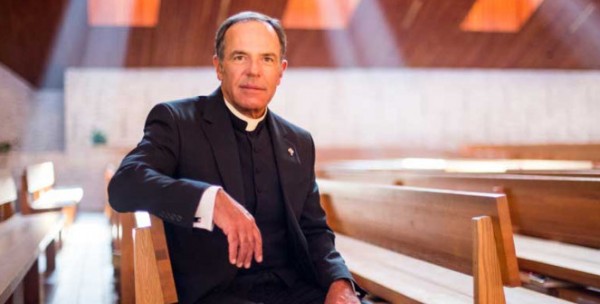 A Catholic priest in Indiana has been suspended by his diocese for condemning the organization Black Lives Matter in his weekly message last Sunday.

His bishop, Timothy Doherty of the Diocese of Lafayette-in-Indiana, ordered the move Wednesday.

"The Bishop expresses pastoral concern for the affected communities," the diocese said in a statement Wednesday, reported the Indianapolis Star newspaper. "The suspension offers the Bishop an opportunity for pastoral discernment for the good of the diocese and for the good of Father Rothrock."

The suspension came after the newly formed Carmel Against Racial Injustice group demanded that the bishop remove Rothrock from leadership of the church.

Referring to BLM, Rothrock wrote in his weekly message last Sunday that the "only lives that matter are their own and the only power they seek is their own."

"They are wolves in wolves clothing, masked thieves and bandits, seeking only to devour the life of the poor and profit from the fear of others," he said. "They are maggots and parasites at best, feeding off the isolation of addiction and broken families, and offering to replace any current frustration and anxiety with more misery and greater resentment."

The priest said the church must oppose Black Lives Matter and Antifa and carry the "message of peace."

He doubted Frederick Douglass and Martin Luther King Jr. would have been marching with the Black Lives Matter organizers, who allege "systematic racism."

"Black Lives Matter, Antifa, and the other nefarious acolytes of their persuasion are not the friends or allies we have been led to believe," Rothrock wrote. "They are serpents in the garden, seeking only to uproot and replant a new species of human made in the likeness of man and not in the image of God."

'It was not my intention to offend'

The diocese, the Indianapolis paper reported, has canceled its plan to appoint Rothrock as pastor of another parish, Our Lady of Mount Carmel. And a deacon will take over his current role as administrator of St. Elizabeth Seton.

The diocese said "various possibilities for his public continuation in priestly ministry are being considered."

The paper noted that all of the priest's weekly messages and the staff contact page have been removed from the parish's website.

Rothrock apologized Tuesday night in a message sent to parishioner that later was posted on the church's website.

"It was not my intention to offend anyone, and I am sorry that my words have caused any hurt to anyone," he wrote.

Everyone is welcome in God's kingdom, he said, and the church must condemn bigotry.

Prior to the priest's statement, the bishop wrote a "Pastoral response to racism" in which he had not approved or previewed the priest's offending article.

"Pastors do not submit bulletin articles or homilies to my offices before they are delivered," he said. "I expect Father Rothrock to issue a clarification about his intended message. I have not known him to depart from Church teaching in matters of doctrine and social justice."

The group Carmel Against Racial Injustice said in a statement it was "disgusted and shocked by the recent letter written by Father Theodore Rothrock."

"We are also deeply saddened by the fact that the church leadership did not condemn the statement and saw fit to allow its publication. Silence is the action of being complicit in injustice," the group said.