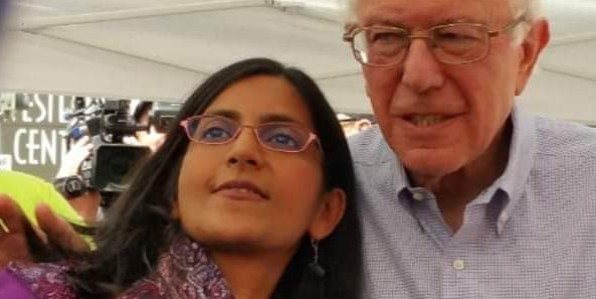 As a member of the Seattle City Council, she's had an outsized influence on the nation, leading the charge for a $15 minimum wage.

Now, with the passage of her so-called "Amazon Tax," the Socialist Alternative party member, Kshama Sawant, is making it clear that her legislative measures are only part of a much larger agenda.

Calling the passage Tuesday of a more than $200 million tax on top of the 3% city tax on corporations "a historic victory for working people," she warned Amazon CEO Jeff Bezos "and his class" that she and her allies are "preparing the ground for a different kind of society."

Sawant declared "we are coming for you and your rotten system."

"We are coming to dismantle this deeply oppressive, racist, sexist, violent, utterly bankrupt system of capitalism, this police state," she said Tuesday in a video message after the City Council vote.

"We cannot and will not stop until we overthrow it and replace it with a world based instead on solidarity, genuine democracy, and equality – a socialist world."

Sawant's political views are shared by members of the freshman "squad" of socialists in the House, who are influencing the Democrats' congressional agenda as well as Joe Biden's presidential campaign.

Earlier Tuesday, Rep. Ilhan Omar, D-Minn., made a similarly bold declaration of their ultimate intent, calling for the "dismantling" of the U.S. economy and political system.

"As long as our economy and political systems prioritize profit without considering who is profiting, who is being shut out, we will perpetuate this inequality," Omar said at an event in her home state on "racism in policing."

"We cannot stop at criminal justice system," she said. "We must begin the work of dismantling the whole system of oppression wherever we find it."

Omar should resign, Republican Sen. Marsha Blackburn of Tennessee said in response, arguing the congresswoman "took an oath to defend and protect the Constitution, not shred it."

"Omar and her Marxist comrades are a threat to our Democracy," Blackburn wrote on Twitter.

In January, Sawant declared in a tweet that she was "all in" for Bernie Sanders' campaign for president, "because we need a political revolution against the billionaire class, an Organizer-in-Chief prepared to build the movement of millions needed to win far-reaching change."

When the socialist Sanders was in the race, Joe Biden promised "nothing would fundamentally change" if he were elected, reasoning voters "are looking for results, not a revolution." Now, as the presumptive Democratic nominee, he's calling for "revolutionary institutional changes."

On Wednesday, Sanders and Biden released the policy recommendations of their "unity task force." Among them are providing a "public option" that would move the nation toward universal health care.

Sawant has called for the nationalization of major Washington state corporations such as Boeing and Microsoft, along with Amazon. She said she wanted to see housing in "Millionaire's Row" in the Capitol Hill neighborhood – the site of the CHOP autonomous zone – turned into a publicly owned shared housing complex.

"When things are exquisitely beautiful and rare, they shouldn't be privately owned," she declared.

Her party once touted the "promise" of Hugo Chavez' socialist "revolution" in Venezuela and now blames its inevitable failure not on socialism but on not being socialist enough. Chavez "failed to break with the capitalist class," and his successor, Nicolas Maduro, has been "unwilling to stand up to foreign and domestic capitalist forces by bringing the banks and large corporations into democratic public ownership."

Seattle's City Council unanimously passed a tax in 2018 of $275 per employee annually for companies that make more than $20 million in revenue. Amazon and Starbucks were among the local companies that resisted, with Amazon saying it would reconsider projects in the city.

That led to a repeal by a majority of the council. But after the vote Tuesday, Sawant said Bezos "and his billionaire friends are wishing they could call a do-over and have the modest 2018 tax back."

"Because this new tax on Seattle's wealthiest businesses is four times larger," she boasted. "And every penny is needed, and far more in fact, to stop the racist gentrification, sky-high rents, and homelessness in this city with a massive expansion of public affordable housing and jobs."

She said it's a housing and jobs bill, and it's "no accident this comes in the midst of the historic Black Lives Matter rebellion."

"The legitimacy of the status quo has been utterly smashed by the protest movement, the pandemic and the deepening crisis of capitalism," she said.

Sawant called the Amazon Tax "perhaps the biggest progressive win in Seattle since socialists and labor unions led the way on the $15 minimum wage, which passed first here and then was won in cities and states around the country."

"We hope that once again we can inspire working people and youth nationally and globally – in this crucial fight against the billionaire class which is attempting to force working people to pay for the current crisis of capitalism with massive budget cuts," she said.

She called for building on her movement's momentum by "winning the release of all arrested protesters without charges" and defunding Seattle police by at least 50%.

"The struggle for black liberation will also mean campaigning for elected community oversight boards with full powers over the police, including hiring and firing, policies and procedures," she said.

"Not just here and now, but everywhere and always," Sawant said. "Because capitalism is completely incapable of meeting the most basic needs of working people.

"Internationally," she said, "the working class needs to take the top 500 corporations into democratic public ownership, run by workers, in the interests of human need and the environment, not billionaire greed."