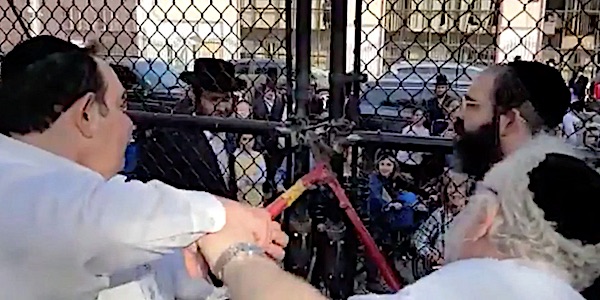 Nearly four months after the coronavirus arrived in Brooklyn's Hasidic Jewish community, synagogues and camps are open, yeshivas resumed classes before closing for summer break and wedding halls are packed again, sometimes in violation of city and state rules.

The relief came after months of funerals and fear, along with criticism from New York City Mayor Bill de Blasio and others, the Jewish Telegraphic Agency reported.

Now, the overwhelming belief in the community is that most of its members have had the virus, recovered and now may now be immune.

"That's the feeling, that they've had it, everybody they know has had it, and the people they know who haven’t had it have some kind of immunity that we just don’t understand yet," one local health administrator said.

Surveys and tests suggest as many as 70% of the community has had COVID-19 and recovered. And amid a near total return to normal behavior, new cases have slowed or stopped entirely in their neighborhoods, JTA reported.

If true, could the community offer lessons and hope for the rest of the nation?

JTA pointed out that large families in cramped apartments and a highly social way of life made it nearly impossible to prevent a major outbreak. Most cases came in the days leading up to and on the Jewish holiday of Purim, March 9 and 10. That was before the mayor and governor shut down schools and businesses.

It's believed, JTA said, that parties and prayer services on Purim seeded the epidemic in Crown Heights, Borough Park and other neighborhoods with large Orthodox communities.

A week later, with a little more than 800 confirmed coronavirus cases across New York City, more than 100 cases had come from only one Borough Park clinic serving Orthodox Jews.

That was the beginning, JTA recalled.

"Over the coming weeks, the communities were ravaged by the disease. Death notices were posted hourly on Orthodox news sites," JTA said. "Burial societies worked continuously and ran out of the shrouds required to lay the dead to rest. Funeral homes recruited people with SUVs to transport bodies they lacked the capacity to handle."

But about two weeks after Passover, which ended in mid-April, the pace of deaths slowed as abruptly as it began.

Social distancing began to wane, and in late April thousands crowded Williamsburg streets for the funeral of a rabbi who had died of COVID-19, drawing rebuke from de Blasio. A crowd at another funeral two days later was dispersed by city police. Some yeshivas reopened illegally, holding classes in basements or teachers' homes.

But no spike in cases followed, JTA said. Doctors, under the auspices of a professional development group called the Gedaliah Society, surveyed 3,500 people in the Crown Heights neighborhood for antibody test results. They estimated that slightly more than 70% of the community's adults between the ages of 25 and 65 had "been sick with COVID-like symptoms."

The true rate is impossible to know without random testing, but if their estimates are correct, the community is within the range that scientists say is likely to confer herd immunity.

Across New York City, an antibody study had showed a positive rate of 19.9% in May. In early June, a survey of more than 28,000 antibody test results in the New York City area showed that 44% who walked into clinics for antibody testing were found to have them.

Dr. Gary Slutkin, an epidemiologist who worked with the World Health Organization for over 10 years on AIDS programs in Africa, confirmed to JTA that "more spread leads to closer possibility for some herd immunity."

He said between 50% to 80% of the population would need to be immune from the disease to significantly mitigate the spread.

"It's just taken as a given" that herd immunity is protecting the community, said a Borough Park woman.

"I'm walking now and I don't see anyone wearing a mask."