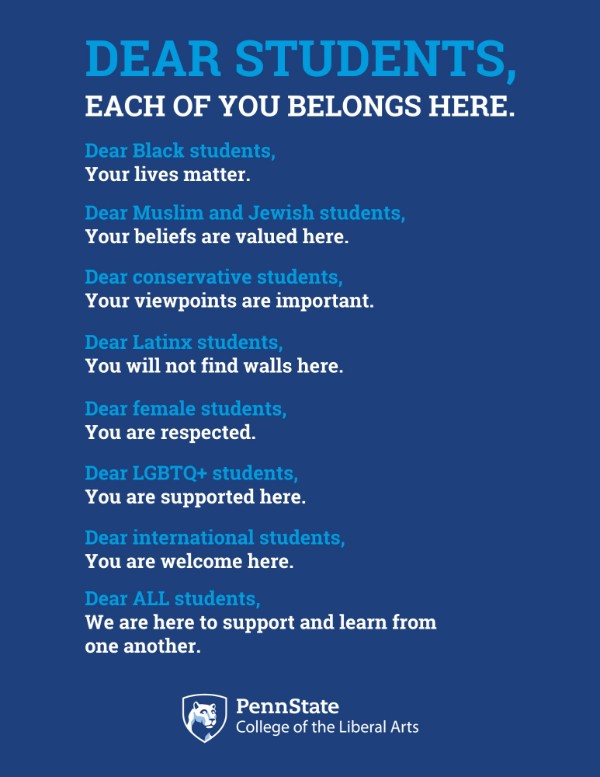 A message from Penn State's liberal arts department declaring it welcomed the viewpoints of conservative students was deleted after an intense backlash.

The offending tweet had a picture with the title "Dear Students: You Belong Here" followed by affirmations of black, Muslim, Latinx and LGBTQ+ students. It also assured, "Dear conservative students, your viewpoints are important."

It was the last line that blew up social media, reported College Reform.

The student newspaper, The Daily Collegian, published some of the reactions of students.

Another student said the tweeted drowned out her voice as an African-American.

"The fact that Penn State cannot even come up with their own flyer to spew their lies of solidarity and support is disgusting," the student said.

A third student insisted the university's administration must "combat racism with a comprehensive plan" or suffer "unbearable consequences."

Penn State Director of Strategic Communications William Hessert, Jr told Campus Reform the message was deleted because it "was not being received well, and it is important for us that our messages be received as intended."

"While we do not believe in deleting our posts, given the sensitivities of the matter we felt that it was better to remove it," Hessert said.

Commenting on the spokesman's concern that the "message was not being received well," Turley wrote that Penn State essentially was saying "we wanted to assure conservative students with other students that they are welcomed but many disagreed with their inclusion in that sentiment. So we deleted the welcome."

Turley pointed out "polling shows that conservative students are much more fearful of expressing themselves in classes and on campuses due to a lack of support – and often outright hostility – from administrators and faculty."

The university's "gesture of inclusivity," he wrote, turned into "a chilling messaging of hostility for conservative students who want to join their community."