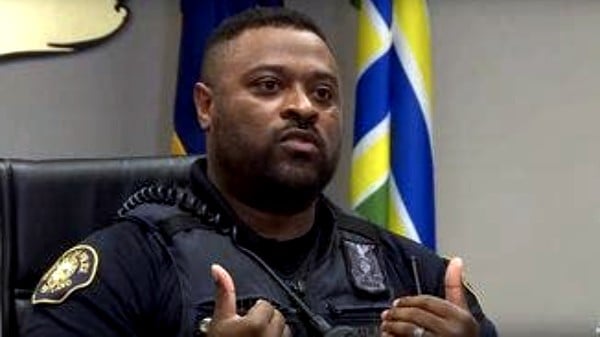 A black Portland, Oregon, police officer recounted to media his experience with white Black Lives Matter protesters in the Northwest city who have been verbally abusive to him and other black officers and "have no idea what racism is all about."

"It says something when you’re at a Black Lives Matter protest and you have more minorities on the police side than you have in a violent crowd," Jakhary Jackson said at a news briefing July 9 after six weeks of daily protests.

"And you have white people screaming at black officers, 'You have the biggest nose I’ve ever seen!'"

Jackson said people who truly have been impacted by racism and "want to see justice like the rest of us" are being "faded out by people that have no idea what racism is all about."

As a graduate of Portland State University with a history degree, he said, "it's actually frightening."

Jackson said that every day, people of all kinds, black, Hispanic and white, come up to him at the fence and engage in conversation, asking his opinion about issues such as what happened to George Floyd.

Every time he tries to have a conversation with a black person, he said, a white person intervenes, shouting epithets such as "F--- the police, don't talk to him."

He also recalled seeing a black-owned business that had been looted.

"They're not even from here," he said of the perpetrators. "They don't even know that they're doing."