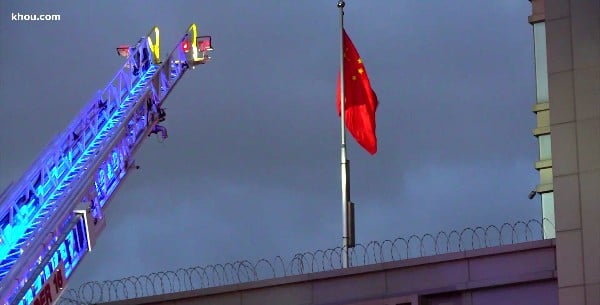 Condemning an "unprecedented escalation" by the United States, China has threatened to retaliate after it was ordered to close its consulate in Houston.

Beijing called the eviction a violation of international law, Reuters reported. KPRC-TV in Houston, citing police sources, said the consulate has been ordered to close by Friday along with a residential compound.

Wang, noting the consulate had been operating as normal Tuesday, called the move an "unprecedented escalation," the South China Morning Post reported.

Ortagus said the U.S. "will not tolerate the PRC's violations of our sovereignty and intimidation of our people, just as we have not tolerated the PRC’s unfair trade practices, theft of American jobs, and other egregious behavior."

"President Trump insists on fairness and reciprocity in U.S.-China relations," she said.

"You could just smell the paper burning," the witness said. "But, all the firefighters were just surrounding the building. They couldn’t go inside."