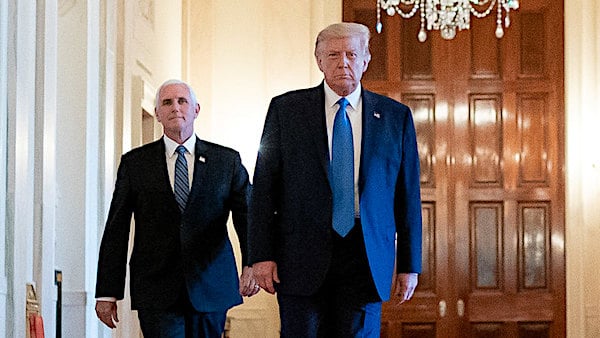 President Trump on Thursday floated a "delay" of the November presidential election, contending universal mail-in voting would make it the most "inaccurate and fraudulent" in history, drawing rebuttal from Republican leaders as well as Democrats.

“Delay the Election until people can properly, securely and safely vote???” he asked on Twitter.

"With Universal Mail-In Voting (not Absentee Voting, which is good), 2020 will be the most INACCURATE & FRAUDULENT Election in history. It will be a great embarrassment to the USA."

Hogan Gidley, national press secretary for Trump's campaign, followed up with a statement of clarification later Thursday morning, saying "the president is just raising a question about the chaos Democrats have created" with their election policies.

While saying he had no "reason to think" the election would be rigged, he insisted that "if you have wholesale mail-in voting, it substantially increases the risk of fraud."

Barr also acknowledged he had not looked into whether or not the president has the constitutional power to delay the election.

The Constitution gives Congress the authority to set Election Day, and any change likely would require congressional approval.

Trump offered evidence that mail-in voting is not reliable, linking to a local TV news probe of problems with voting by mail in Philadelphia. And he cited New York's disastrous mail-in voting during the Democratic primary in June.

"Votes from many weeks ago are missing – a total mess. They have no idea what is going on," Trump tweeted. "Rigged Election. I told you so."

Mail-In Voting is already proving to be a catastrophic disaster. Even testing areas are way off. The Dems talk of foreign influence in voting, but they know that Mail-In Voting is an easy way for foreign countries to enter the race. Even beyond that, there’s no accurate count!

Senate Judiciary Chairman Lindsey Graham of South Carolina was among the Republicans who told CNN that delaying the election was a bad idea.

Majority Whip Sen. John Thune told the network it's "probably a statement that gets some press attention, but I doubt it gets any serious traction."

"I think we've had elections every November since about 1788, and I expect that will be the case again this year," Thune said.

Senate Majority Leader Mitch McConnell said in an interview with WNKY: "Never in the history of the country, through wars, depressions and the Civil War, have we ever not had a federally-scheduled election on time. We'll find a way to do that again this November 3rd."

House GOP leader Kevin McCarthy of California insisted the election will go on as scheduled but defended Trump's concerns about vote fraud.

Sen. Ted Cruz, R-Texas, said, "Election fraud is a serious problem we need to stop it and fight it, but no the election should not be delayed."

"I wish he hadn't said that, but it's not going to change: We are going to have an election in November and people should have confidence in it."

"All I can say is that, it doesn't matter what one individual in this country says," he wrote on Twitter. We still are a country based on the rule of law. And we must follow the law until either the Constitution is changed or until the law is changed."

"Mark my words, I think he is going to try to kick back the election somehow, come up with some rationale why it can't be held," Biden said.

Trump reacted days later: "I never even thought of changing the date of the election. Why would I do that? November 3rd. It's a good number. No, I look forward to that election."