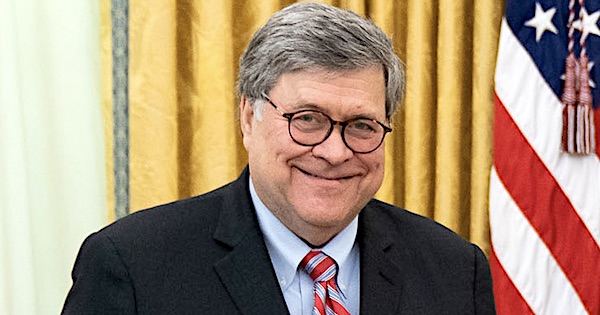 In remarks prepared for delivery to the U.S. House Judiciary Committee in Tuesday, Attorney General William Barr accused Democrats of trying "to discredit me by conjuring up a narrative that I am simply the president's factotum who disposes of criminal cases according to his instructions."

"Judging from the letter inviting me to this hearing, that appears to be your agenda today," he charged.

That is not truth, Barr insisted.

"Political rhetoric is inherent in our democratic system, and politics is to be expected by politicians, especially in an election year," he said. "While that may be appropriate here on Capitol Hill or on cable news, it is not acceptable at the Department of Justice. At the department, decisions must be made with no regard to political pressure—pressure from either end of Pennsylvania Avenue, or from the media or mobs."

He referenced the Obama administration's use of the U.S. intelligence agencies to spy on the Trump campaign based on the now-debunked claim of collusion with Russia.

Democrats have been on the attack "ever since I made it clear that I was going to do everything I could to get to the bottom of the grave abuses involved in the bogus 'Russiagate' scandal."

He contended he has handled all decisions "without regard to political or personal considerations. ... The president has not attempted to interfere in these decisions. On the contrary, he has told me from the start that he expects me to exercise my independent judgment to make whatever call I think is right. That is precisely what I have done."

Before becoming attorney general he saw "the increasing use of the criminal justice process as a political weapon and the emergence of two separate standards of justice. The department had been drawn into the political maelstrom and was being buffeted on all sides."

He said he took the job because he thought he could steer the DOJ "back to her core mission of applying one standard of justice for everyone and enforcing the law even-handedly, without partisan considerations."

He insisted that's what he's done.

Referring to the death of George Floyd in Minneapolis, he pointed out that police departments today are "far more diverse than every before."

He said the use of excessive force is rare and "every instance ... is unacceptable and must be addressed, as is happening now in Minneapolis."

It's unfortunate, he said, that "some have chosen to respond to George Floyd’s death in a far less productive way – by demonizing the police, promoting slogans like ACAB (All Cops Are B------), and making grossly irresponsible proposals to defund the police. The demonization of police is not only unfair and inconsistent with the principle that all people should be treated as individuals, but gravely injurious to our inner city communities.

"When a community turns on and pillories its own police, officers naturally become more risk averse and crime rates soar. Unfortunately, we are seeing that now in many of our major cities. This is a critical problem that exists apart from disagreements on other issues. The threat to black lives posed by crime on the streets is massively greater than any threat posed by police misconduct."

And regarding the rioters blaming the George Floyd killing for their actions, he said it is "anarchists [who] have hijacked legitimate protests to wreak senseless havoc and destruction on innocent victims."

"The current situation in Portland is a telling example. Every night for the past two months, a mob of hundreds of rioters has laid siege to the federal courthouse and other nearby federal property. The rioters arrive equipped for a fight, armed with powerful slingshots, tasers, sledgehammers, saws, knives, rifles, and explosive devices. Inside the courthouse are a relatively small number of federal law enforcement personnel charged with a defensive mission: to protect the courthouse, home to Article III federal judges, from being overrun and destroyed."

What is happening there is not a protest, but "an assault on the government of the United States. In recent nights, rioters have barricaded the front door of the courthouse, pried plywood off the windows with crowbars, and thrown commercial-grade fireworks into the building in an apparent attempt to burn it down with federal personnel inside," Barr said.

He decried the characterization by media and local officials of the rioters as protesters.

"To state what should be obvious, peaceful protesters do not throw explosives into federal courthouses, tear down plywood with crowbars, or launch fecal matter at federal officers. Such acts are in fact federal crimes under statutes enacted by this Congress. As elected officials of the federal government, every member of this committee – regardless of your political views or your feelings about the Trump administration – should condemn violence against federal officers and destruction of federal property."