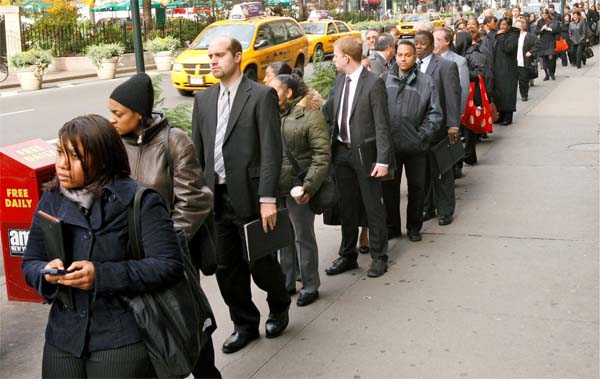 Though the latest jobs report provides some optimism, with the unemployment rate dropping to 11.1% in June from a record-high of 14.7% in April, over 30 million Americans are still having to rely on unemployment benefits.

To their credit, Congress, the U.S. Treasury Department, and the Federal Reserve have marshalled an unprecedented, multi-trillion dollar response to this economic and employment crisis. This included measures to shore up financial and credit markets, loans and grants to small businesses, individual stimulus checks and expanded unemployment insurance.

And yet a question must be asked:

Shouldn’t this historic government response from Washington buy us something better than the worst unemployment crisis since the 1930s, with millions of workers unsure when or if they’ll be able to go back to their old jobs?

It should, and it could, if America was committed to a more robust program to keep workers connected to their jobs. Like, for example, in Germany, whose “Kurzarbeit” program has helped keep the nation’s unemployment rate at 6.4%, about half what it is in the U.S.

Translated as “short-time work,” Kurzarbeit directly pays workers about two-thirds of their salary while maintaining their employment status during periods of reduced working time. This alternative furlough scheme has proven successful in reducing averting mass unemployment in Germany in previous recessions and is doing so once again now.

Even though Germany’s relatively rosy employment picture can be explained in part by it more effectively stemming the spread of COVID-19 and avoiding the ruinous lockdowns that were required in the U.S., Kurzarbeit has unquestionably played a role in helping prevent layoffs of German workers. Other European countries, including the U.K., Denmark, and the Netherlands, have implemented similar models after recognizing Germany’s success in recovering from the 2008 recession.

Unlike Germany, the U.S. has relied on generous unemployment benefits to support workers impacted by the COVID-19 pandemic. The Pandemic Unemployment Assistance (PUA) provision included in the CARES Act offers recipients an additional $600 from the federal government on top of the state unemployment benefits they are already receiving weekly. While this additional assistance has provided a critical lifeline to millions of Americans, it is both costly and temporary, with the expanded weekly benefit set to expire July 31, 2020.

These expanded unemployment benefits have also led to a separate issue when it comes to rehiring. According to a recent study from the University of Chicago, an estimated 68% of unemployed workers eligible for benefits would actually suffer income losses by returning to work. Putting the burden on the unemployed to access unemployment insurance has also caused problems. A Washington Post-Ipsos poll from May 2020 found that while 60% of laid-off workers reported trying to apply for unemployment benefits, only 28% had received any.

Under the German Kurzarbeit program, when working hours are reduced due to economic shock, employers can apply for the program and have the government pay part of their employees’ salaries or wages (typically 60-70%). All other hours worked are paid as usual by the respective employer. The principle underlying Kurzarbeit is simple: It’s often better for a company and its workers to maintain the job status of their current employees rather than cutting ties altogether. Employers can avoid incurring the cost of hiring and training new workers, and employees can avoid the financial losses and stresses of unemployment. The Kurzarbeit program acts as an automatic stabilizer, kicking in when it is needed and phasing out quickly when economic conditions improve.

With Congress hoping to pass a new, and perhaps final round of coronavirus relief legislation later this month, it is probably too late for a Kurzarbeit-type program to be designed and implemented in time to help U.S. workers through this crisis.

But U.S. lawmakers should strongly consider getting a program like this in place to help American workers through the next economic crisis.

Zane Heflin is a policy analyst with The New Center.