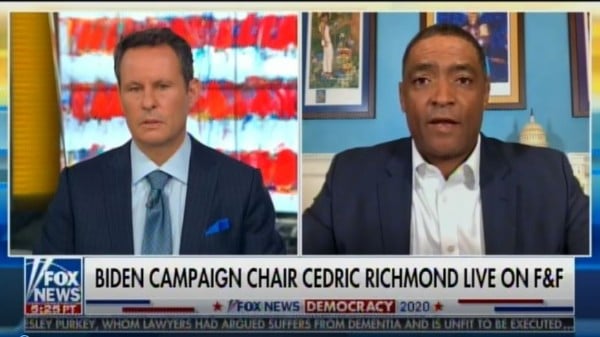 Joe Biden's campaign chairman, Cedric Richmond, thinks supporters of President Trump have a lot in common with supporters of David Duke, the former member of the Ku Klux Klan who was elected to the Louisiana legislature.

There are "secret" Trump voters, he said, who are embarrassed to let it be known that they support the president,  he said in an interview Thursday with "Fox and Friends," reported the Gateway Pundit.

"Well, I'm using it as an example as secret voters and people who voted for someone who may not have great character," he explained.

He also said he wants "fact-checkers" to post notes live on the TV screen during the debates.

In June, at a virtual town hall with black supporters, Biden had what many commentators dubbed his "basket of deplorables" moment, referring to Hillary Clinton's description of Trump voters during the 2016 election campaign.

Regarding Trump supporters, Biden said, "There are probably anywhere from 10 to 15% of the people out there who are just not very good people, but that's not who we are."