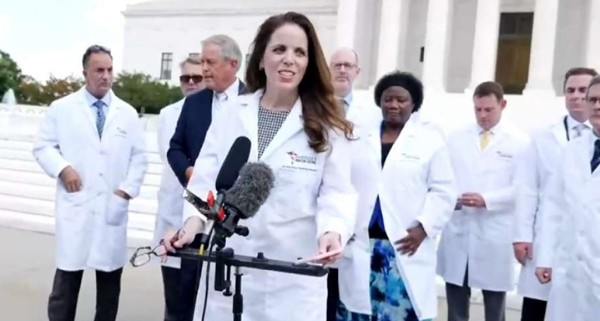 Dr. Simone Gold, a board certified emergency physician in Los Angeles, at a press conference in front of the Supreme Court building in Washington, D.C., July 27, 2020, featuring physicians who participated in a "White Coat Summit." (Video screenshot)

The posting of a video of doctors testifying that they've seen first-hand what peer-reviewed studies worldwide indicate – that hydroxychloroquine is a safe and effective treatment for COVID-19 – has resulted in the temporary suspension of social media accounts of PragerU, other prominent conservatives and one of the doctors in the video.

Twitter explained that PragerU and others were suspended because of the social media platform's "policy on spreading misleading and potentially harmful information related to COVID-19," Breitbart News reported.

One of the physicians in the video of a press conference in front of the U.S. Supreme Court on Monday with "America's Frontline Doctors," Dr. Simone Gold, wrote on Twitter that the company hosting the doctors' website, Squarespace, took down the site due to a "violation of their terms of service."

Gold, a board certified emergency physician for 20 years in Los Angeles, told Tucker Carlson on Thursday night she has been fired because of the video.

She told Carlson the doctors have published a white paper presenting the science backing hydroxychloroquine, which she noted is an FDA-approved medication that's been in use for 65 years.

The press conference was tied to a summit of more than seven hours in Washington on a wide range of subjects relevant to the pandemic, including the lockdowns and whether or not children should return to school this fall.

We are a group of physicians advocating for a better understanding of COVID-19 and its available treatment options.

Earlier this week, Twitter suspended the account of the president's son Donald Trump Jr. for 12 hours after he shared a video clip of press conference in front of the U.S. Supreme Court building.

PragerU's tweet promoting the video said: "American doctors are holding a ‘White Coat Summit’ in Washington, D.C. to address ‘a massive disinformation campaign’ by the media about coronavirus. Watch as Dr. Stella Immanuel tackles the media’s narrative about hydroxychloroquine."

Breitbart reported director and producer Robby Starbuck was suspended from Twitter on Wednesday after replying to someone: "I guess you think Dr. Harvey Risch, an epidemiology professor at Yale School of Public Health isn’t a real doctor? He’s also touting that Hydroxychloroquine works."

Risch, in an interview with Fox News' Laura Ingraham on July 20, said hydroxychloroquine is "a political drug now, not a medical drug."

On May 27, he published an article in the the world's leading epidemiology journal, the American Journal of Epidemiology, that analyzed five studies "demonstrating clear-cut and significant benefits" to treating patients with hydroxychloroquine along with other very large studies that demonstrated its safety.

Among the many other physicians who have found hydroxychloroquine to be an effective treatment for COVID patients is Dr. Stephen M. Smith of East Orange, New Jersey.

In an interview with WND in May, Smith expressed his frustration with the politicization of hydroxychloroquine and the disconnect between the scientific data on the drug and the statements of scientists, media and politicians who have access to that data.

Other physicians who back the treatment are Dr. Scott Atlas, a senior fellow at Stanford's Hoover Institution; Dr. Anthony Cardillo, an emergency medicine specialist in Glendale, California; and Dr. Zev Zelenko.

Atlas said in an interview with Ben Shapiro that there is "fundamental biology" behind why hydroxychloroquine works, "it's not just some sort of strange anecdote."

Twitter also locked out Dr. Stella Immanuel, who said at the "White Coat Summit" she has successfully treated more than 350 patients with hydroxychloroquine, zinc and azithromycin.

She and her staff take hydroxychloroquine as a preventative.

"WE NEED YOUR HELP. We are being attacked, ridiculed and discredited. We need our patients to SPEAK UP," the doctor wrote in a tweet that later was deleted.

"If you have been cured by this drug, share your story online using this hashtag #HCQWorks."

EXCLUSIVE interview with Dr Immanuel who claims to have SUCCESSFULLY treated 100s of COVID-19 patients. pic.twitter.com/MCYWbW3ZfU

Some took issue with her describing hydroxychloroquine as a "cure" while others argued the point is that the patients recovered from COVID-19.

Many skeptics questioned whether or not the presenters Monday actually were physicians.

Here's a summary of their credentials:

Dr. David Samadi was also suspended from Twitter after violating rules regarding information about the coronavirus pandemic, Breitbart reported.

"If people hate President Trump, that is entirely their prerogative," tweeted Samadi. "When their hatred causes them to deliberately hide good news about a life-saving treatment for a global pandemic, that is when the line is crossed. Hydroxychloroquine works and it has worked."