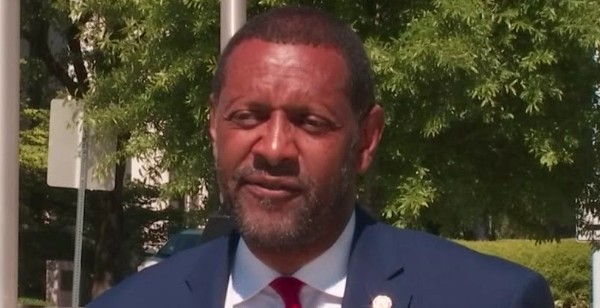 Vernon Jones, a black Democratic representative in the Georgia state House, says he has many more reasons not to support his party's candidate for president than when he declared in April he would back President Trump.

In a column published by the Daily Caller, he asked where Joe Biden and Barack Obama were on the issue of race when they were in office for eight years.

"I'll tell you. They were absent in unifying this country," he said.

By comparison, 350,000 black American were lifted out of poverty during just the first two years of the Trump administration, Jones argued.

In April, Jones announced his resignation after announcing support for Trump in the 2020 election. A day later, he decided to remain in office, explaining "the outpouring of support I received was too great for me to ignore."

"I will not allow the Democrats to bully me into submission. I will not let them win," Jones wrote on Twitter at the time. "I will NOT resign."

Jones addressed in his column Tuesday the "absurd calls to defund and disband police departments across the country by Democrats in response to the unjust murder of George Floyd."

"These are extreme calls that will only lead to more pain and suffering in our most vulnerable communities," he said, recalling his service as chief executive officer of DeKalb County, Georgia.

While President Trump "has taken a commonsense approach to heal our nation," he said, some protesters have been "determined to sow chaos and destruction, all in the name of racial equality."

Jones recalled filing a bill back in 1993 to remove the Confederate battle emblem from the state flag but said he also understands the importance of preserving history, "the good and the bad."

"And still I bow to no one in my advocacy for the black community," he said.

Unlike other Washington politicians, "this president actually backed up his words with actions," wrote Jones.

"He signed an Executive Order on police reform — taking steps to build a better bridge between law enforcement men and women and their communities."

Biden, on the other hand, was busy during his 36 years in the United States Senate shouting "my children are going to grow up in a jungle, the jungle being a racial jungle."

"That racial jungle he was referring to includes black and brown Americans like me. Right now, President Trump is being defined as a racist by the media, when in reality Joe Biden is the full-blooded bigot," Jones charged.

He noted Biden has boasted that "every major crime bill since 1976 that’s come out of this Congress, every minor crime bill, has had the name of the Democratic senator from the State of Delaware: Joe Biden."

"Now that Biden is running for president in a woke Democratic Party in 2020, he’s attempting to sweep his racist legacy under the rug. We can’t let him," said Jones.

The Democratic lawmaker said Biden "is directly responsible for the mass incarceration policies of the 1980s and 1990s, which decimated the black community."

Meanwhile, Trump has signed the First Step Act, the first major reform of the criminal justice system in a decade.

"As black Americans, we need to be aware of the clear choice in front of us. Joe Biden has betrayed black Americans throughout his career in Washington. President Trump has spent his 3.5 years in office fighting to improve the lives of black Americans," Jones wrote.

He urged Democrats not to "be tricked again" by Democrats like Biden, who "only care about black people during election years."

"The leadership of Joe Biden and President Donald Trump is being revealed for us all to see. Joe Biden is divisive and ineffective. Meanwhile, President Trump is unifying, pragmatic and fearless," he said.

"I am black and I am a Democrat. But 'I ain't' voting for Joe Biden this November."