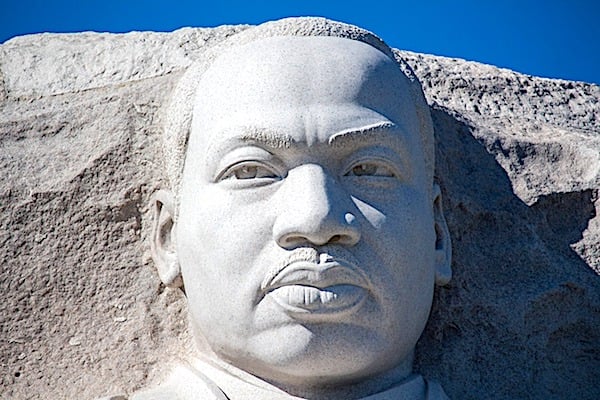 One name that goes conspicuously unmentioned by those self-proclaimed champions of racial justice such as Black Lives Matters is an internationally acclaimed American hero who lived his life for racial equality. Martin Luther King Jr. gave his life for it, too. King’s quest for equality and his legacy are inconvenient for today’s vigilantes, because his efforts contrasted sharply with theirs—both with regard to their goal and means.

While today’s self-righteous violent protesters have left vulnerable inner-city neighborhoods devastated and residents in tears of anguish, King staked all he had on a belief in the unifying power of passive resistance and nonviolence, as did others who brought about worldwide change, from Mahatma Gandhi to Nelson Mandela.

Today’s racial-grievance opportunists portray blacks as impotent victims, unable to move forward or upward under the weight of a legacy of slavery and the all-purpose villain of institutional racism.  In their agenda, equality of opportunity makes no difference. Instead, their proclaimed goal is to demand equality of outcome by monetizing the suffering of their ancestors as reparations—checks that would be handed to them. The demand for reparations ignores problematic issues of who should pay for and who should receive remuneration and the situation of the descendants of blacks who owned slaves and of those who arrived on our nation’s shores—penniless but filled with hope—long after the end of slavery.  The accounts of sports superstars of the NFL and NBA who were once millionaires but ended up bankrupt can serve as cautionary tales regarding the inconsequential impact of cash payouts in the absence of qualities such as delayed gratification, personal restraint, and foresight.

In contrast with today’s racial justice vigilantes, King did not advocate lowering the bar for standards of behavior and ethical values among those he represented. The most aspirational element of his famous Dream was that his children would one day be judged by the content of their character. The history of the black community is replete with evidence that, even against the greatest odds and oppression, moral qualities of personal responsibility, determination, integrity, and mutual assistance were sufficient to empower men and women to achieve success.

In 1917, in the Bronzeville area of Chicago, there were 731 black-owned businesses. Blacks owned $100 million in real estate there in 1929. Some 192 local churches provided social services. In Philadelphia, blacks dominated the catering business until the end of the 19th century, making that city’s catering famous across the country. James Forten, one of Philadelphia’s principal sailmakers, employed more than 40 white and black workers and had a fortune of $100,000 in the 1830s. The Chesapeake and Marine Railroad and Dry Dock Co. was formed by black Baltimore dockworkers after 1,000 black workers lost their jobs in 1863. In St. Louis, Madam C. J. Walker made a million dollars with the invention of the first commercially successful hair-straightening process.

In the first 50 years after the Emancipation Proclamation, black Americans had accumulated a personal wealth of $700 million. They owned more than 40,000 businesses, 40,000 churches, and 937,999 farms. The literacy rate had climbed from 5% to 70%. Black commercial enclaves in Durham, N.C., and the Greenwood Avenue section of Tulsa, Okla., were together known as the Negro Wall Street.

In an era of legalized discrimination, the marriage rate in the black community was higher than it was in the white community despite times of economic deprivation and racism. In 1925 in New York City, 85% of black families had a man and woman raising children. In stark contrast, the current rate of births to unwed mothers is above 75%.  Today, young black men who take responsibility to raise and nurture their children significantly increase those children’s chances for academic success and educational attainment and decrease the likelihood that they will drop out of school, spend time in prison, or engage in destructive or self-destructive behavior.

Dr. King said that we must reach down into the deep, dark regions of our souls and sign our own Emancipation Proclamation. In looking back, we need to rediscover the standards and institutions that blacks historically embraced to accomplish the liberation of mind and spirit that allowed them to survive and thrive.

Intertwined with the agenda of today’s racial justice warriors is the ultimate goal of the destruction of the nation. Dr. King was confident in the belief that the success of his quest for equality was rooted in the promise of America’s founding vision and documents and the progress that has been made toward their realization. In his “Letter From a Birmingham Jail,” he wrote:

“One day the South will know that when these disinherited children of God sat down at lunch counters, they were in reality standing up for what is best in the American dream and for the most sacred values in our Judeo-Christian heritage, thereby bringing our nation back to those great wells of democracy which were dug deep by the founding fathers in their formulation of the Constitution and Declaration of Independence…. We will reach the goal of freedom in Birmingham and all over the nation because the goal of America is freedom … and our destiny is tied up with America’s destiny.”

Robert L. Woodson Sr. is founder and president of the Woodson Center and a leader on issues of poverty alleviation and empowering disadvantaged communities to become agents of their own uplift.