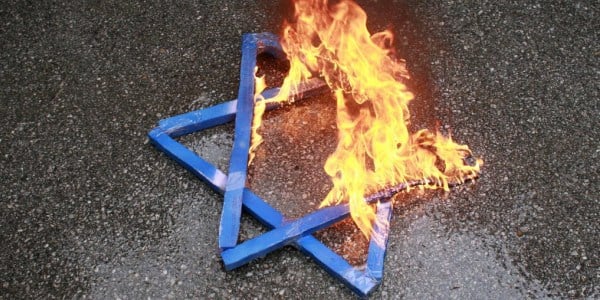 While the Black Lives Matter movement is focused on claims of "white supremacy," an anti-Semitic strain has arisen, writes British academic historian and columnist Zoe Strimpel.

"This is because the most committed anti-racists see Jews as part of an imperialist racist Zionist conspiracy, represented by Israel."

The latest incident took place over the weekend when Philadelphia Eagles wide receiver DeSean Jackson posted a series of anti-Semitic Instagram posts that included a quote about Jews falsely attributed to Adolf Hitler.

The Eagles released a statement saying team officials had "spoken with" Jackson about the "offensive, harmful, and absolutely appalling" posts.

They said that while Jackson claimed "has no hate in his heart," his amplifification of such messages was wrong.

In a statement, the groups said, "We are willing to work with the Eagles and Mr. Jackson on education and outreach."

"He was trying to educate people, educate himself, and he's speaking the truth," Stephen Jackson said.

Strempel wrote that according to anti-Semites, Israel "is the world’s single biggest problem, and they believe it exists solely to egregiously and brutally oppress people of color – including, but not limited, to their Arab neighbors."

"Jews, Zionists and racists unite, for them, in one toxic brain fog."

She noted the rioting in Los Angeles that followed the murder of George Floyd "saw a number of Jewish shops destroyed, synagogues vandalized with 'Free Palestine' graffiti, and a statue of Raoul Wallenberg, the Swedish diplomat who saved thousands of Hungarian Jews from being murdered by the Nazis, daubed in antisemitic slogans."

In Paris, she said, a rally inspired by Black Lives Matter featured placards and stickers with statements such as "Israel, laboratory of police violence," "Who is the terrorist?," "Palestine to the Palestinians! Boycott Israel!s" and "Stop collaboration with Israeli State terrorism."

Strimpel said, "The Place de la Republique was soon ringing with mass chants of 'dirty Jews' – howls that the leader of the French far Left, member of parliament Jean-Luc Melenchon, managed to deny were antisemitic."

In the U.S., rapper Ice Cube posted a cartoon that was "nearly identical to one used by Nazis in the 1930s to incite hatred and violence against Jews," the commentary said.

The Times of London reported Jewish groups flagged a statement on social media from Black Lives Matter about the Israeli-Palestinian conflict accusing Jews of the "spread of hatred."

Marie van der Zyl of the board of deputies of British Jews described it as an "antisemitic trope."

"It is beyond disappointing that a supposedly anti-racist organization has leant into the antisemitic trope that British politics is 'gagged' in terms of debating Israel."

She said, however, that such failings would not stop her organization from "standing alongside black people."

Danny Stone, chief executive of the Antisemitism Policy Trust, wrote at City A.M. in the U.K. that "shadow education secretary Rebecca Long-Bailey tweeted public support for a newspaper interview given by the actor Maxine Peake."

Stone wrote: "The article, in which Peake said that anyone who couldn’t vote for Labour because of Jeremy Corbyn had 'voted Tory', included this line: 'The tactics used by the police in America, kneeling on George Floyd’s neck, that was learnt from seminars with Israeli secret services.' This was later accompanied by a factual clarification to the contrary, inserted by the paper."

He said that "whatever the ill in the world, antisemitism will find a way to place Jews behind it."

"It is also the case when those in online conspiracy forums blame Jews for beginning a race war, and thus inspiring anti-black racism."