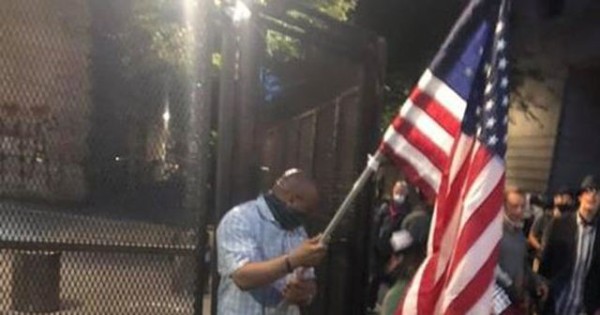 After more than seven weeks of violent protests, a U.S. Marine veteran holding an American flag confronted protesters in front of the federal courthouse in Portland, Oregon, charging none of them "represent black lives."

"If you stand for justice, come here and stand with me. Stand with me because I’m here for justice," said Gabriel Johnson in front of the Mark O. Hatfield United States Courthouse on Sunday, reported Breitbart News.

Johnson, who lives in a nearby apartment, told the local Fox affiliate, KPTV, that he suffers from PTSD after serving in Iraq.

"I felt compelled to show my patriotism and to try to bring a different message to the courthouse," he said.

See the report by KPTV-TV Portland:

He said his intent was not to make a political statement but to promote unity and freedom.

"These people aren't about black lives, and they don't represent me," he said.

A man with an American flag ask why the mob is ripping down the fence in front of the Federal Courthouse #Portland pic.twitter.com/XP5QZtLTRO

Johnson said he did not agree with federal law enforcement officers being in Portland, but he supports the police and the city and wants citizens to unite.