Since the Marxist organization Black Lives Matter™ has been around for a several years now, and since police interactions resulting in fatalities are nothing new (BLM's biggest complaint), one has to wonder why it's only now that they're telling us that we need to dismantle the entire nation's police force over something that is as old as policing itself. After all, Democrats held both Houses of Congress at the start of the Obama administration and had unilateral power to do whatever they wanted, yet none of this was an issue for them. Nor was it an issue for the future founders of Black Lives Matter™.

But now all of a sudden Democrats and Marxists are telling us that police interaction is the most significant issue of our times. Why is that?

If we listen to the Marxist Black Lives Matter™ narratives foisted upon us by the leftist media and Democratic politicians, we would think that literally hundreds of African Americans are dying daily at the hands of police under the "racist" Trump administration, and that this is the reason police interaction is the most important issue of our times. But what do the numbers, meaning actual facts as opposed to completely made-up narratives, have to tell us?

As it turns out, deep diving some key data makes it laughably easy to understand why Black Lives Matter™ to Democrats. And the numbers prove that it has nothing at all to do with the fact that black lives matter: 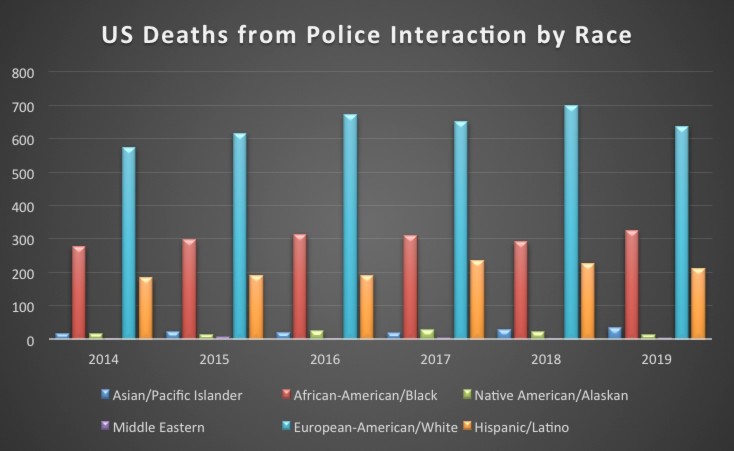 First, the data, as sourced from the leftist mappingpoliceviolence.org and processed and charted by me, tells us a story of statistical flatness over the last three years of the Obama administration through the first three years of Trump's. And for the nitpickers compelled to delve into statistical insignificance, the numbers also tell us that black fatalities rose 4% for the first three years combined of the Trump administration compared to the last three years combined of Obama's. But the data also reveal that white fatalities rose at almost double that rate, at 7%. Never mind that the overwhelming majority of all incidents regardless of race involved resisting arrest.

Given these statistical realities, what we really need to ask ourselves is why in the world the Democrats would suddenly be frothing at the mouths like a swarm of rabid bats over the opportunity to co-opt the openly Marxist Black Lives Matter™ organization. History proves over and over again that black lives don't really matter to mainstream Democrats, and for them to openly court a Marxist organization is at best extreme-risk political behavior. So why in the world are they doing this?

The answer lies in the second part of the data's story. It has to do with what Democrats see in demographic polling data (see WND's article "Zogby: Biden's support from blacks is 'dismal'"). What was once a 100% reliable monolithic voting bloc that could be counted on to deliver greater than 95% support is unraveling for Democrats. And Democrats know that this is literally an extinction-level political event for them if they fail to reconstitute the monolithic black voting bloc by November.

Is it any wonder that Democrats are doing everything possible to try to destroy before November the unprecedented economic gains made by African Americans under the current administration? And is it any wonder that Democratic leadership would stoop to something as ignorant and culturally appropriating as kneeling with Kente cloths draped around their necks? They are beyond desperate.

A loss of even 10% of the black vote would matter to Democrats in a massive way. Now that the loss is potentially 30% or more, Democrats have become irrationally desperate. Irrational to the point of co-opting the openly Marxist Black Lives Matter™ in hopes that this organization's incessant incitements to victimist thought can reconstitute the monolithic black vote by November and stave off Democrat political extinction.

Black Lives Matter™ is all about survival for Democrats, and history shows us that the Democrats' collective embrace of this Marxist organization has nothing to do with fact that black lives matter. Just look at Joe Biden's actual record and listen to his recent statements made during the golden age of wokeness for all the proof one needs.

So, Democrats can spare us all of their empty rhetoric about how black lives matter to them, because we all know better. Only Black Lives Matter™ matters to Democrats because they see Black Lives Matter™ as their only hope to restore the monolithic black vote by November. This would be laughably obvious except that riots that kill people, burned out cities, protest-driven COVID-19 spikes, engineered financial harm, rapidly deteriorating racial relations, demoralized and defunded police departments and all the rest aren't funny in the least. So, we're stuck with it being painfully obvious.