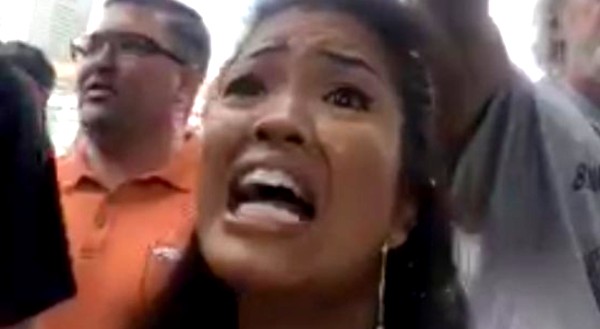 Dressed in black bloc and armed with collapsible batons and a longboard, Antifa activists allied with Black Lives Matter attacked conservative columnist and author Michelle Malkin and others while she was on stage during a rally in Denver in support of police.

In a video posted on Twitter, Malkin can be heard screaming at the violent mob at Civic Center Park to get back. She said she was sprayed in the face with aerosol string, and the rally organizer, Ron MacLachlan, was beaten with a longboard and a bullhorn, reported BizPacReview.

Malkin wrote on Twitter that Black Lives Matter and Antifa gave advance notice to police that they intended to "shut down" the "Back the Blue" rally that was part of "Law Enforcement Appreciation Day."

The video shows the attackers were allowed to walk up to the stage.

The Denver Post reported police attempted to form a line around the two groups but failed to completely separate them.

KMGH-TV reported counter-demonstrators included the Party for Socialism and Liberation and the Afro-Liberation Front.

The mob, the station reported, was "armed with pots and pans, whistles, hand-held sirens and other noise making gear."

They "crashed the Pro-Police rally and drowned out those trying to speak."

.@michellemalkin and others were attacked on stage by antifa & BLM militants at a "Back the Blue" rally in Denver, Colo. A masked woman dressed in black bloc readies her collapsable baton. pic.twitter.com/hPbxeTj5hq

Black Lives Matter supporter Hale Rardin told the KGMH, "There's not much else to say other than every cop here is a terrorist by association."

Malkin told KUSA-TV that Rardin was trying to create a "moral equivalency" between peaceful supporters of police and the violent BLM mob that attacked her and her colleagues.

BizPacReview reported police later used pepper balls and a can of pepper spray to disperse BLM activists afters some people made "aggressive moves" toward officers.