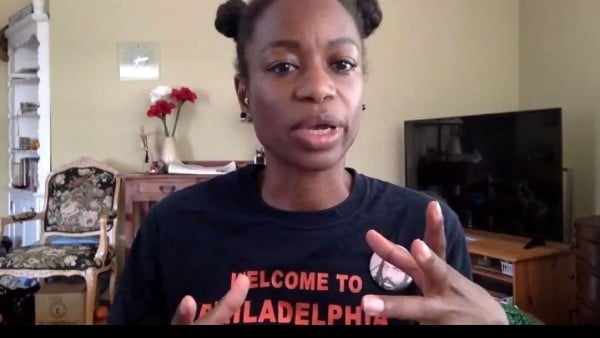 Echoing the "five-year plan" model of the Cold War era, the Philadelphia arm of the Black Lives Matter movement is calling for the "complete abolition" of the police department in five years along with the elimination of military bases abroad.

"One of the things that we are demanding over five years is the complete abolition. We don't want to see any police in our community," she said Tuesday.

"Over the course of those five years, it gives time for the community to begin to build what is needed. We aren't looking to leave any kind of vacancy around the issue of safety."

She argued crime is driven by poverty and hunger, which in turn fuels drug use and associated crimes.

Ndgo calls for dealing with issues from "the ground up," diverting money allocated for police to entities such as "mental health response teams."

"There are plenty of people who have been murdered as a result of mental health checks. The police came, and then they murdered the person, even though the person was acting erratically, which is what you would expect of a person who's having a mental health crisis," Ndgo said. "Domestic confrontations are also things that police are often called for. And these are kinds of situations that can be handled by different kinds of professionals. As it relates to more violent crime, there would still be trained individuals who are prepared to handle those kinds of situations."

"Quite often, if there is violence happening, by the time the police arrive, that has already occurred and particularly in poor neighborhoods and in black and brown communities. So the police are not really a resource for preventing that kind of crime from happening. Just a response," she said.

But the objective of the Black Lives Matter organization is much bigger than defunding police, according to its co-founders, Alicia Garza, Patrisse Cullors and Opal Tometi.

One of Black Lives Matters' stated principles mirrors the historic collectivist objective of  replacing the family with the state.

The wealth of the nation

Ndgo told Fox News on Tuesday that governments are not responding genuinely to Black Lives Matters' demands, pointing to the demand to decrease the police budget.

Ndgo wants the federal government "to actually prioritize the financial discrepancies and inequities in all of our communities."

"The wealth of the nation is very much into the hands of a very small group of people," she said. "And the result of that is a massive amount of poverty and poverty, as often, as I mentioned earlier, is a big reason that a lot of crime happens."

She also called for defunding U.S. military bases abroad, which include the 29 in African nations.

Ndgo argued it would free up "massive amounts of resources for the communities in the United States, and that would mitigate most of the problems that create the so-called problem of crime."

She expressed optimism that real change is coming, pointing to the toppling of the statue commemorating former police commissioner Frank Rizzo.

"Of course, there is the pain and the trauma that comes from the ongoing violence that we've experienced. But there is also the hope that people have as a result of this ongoing state of rebellion, that people have finally reached their limit," she said.

She said the death of George Floyd "took people to a place where they just can't stand to live in a world where this is perpetuated."