Like a raging mega-forest fire started by a single spark, the Memorial Day death of George Floyd ignited a nonstop conflagration of violent social upheaval, arson, rioting, looting, assault, shootings, desecration of historic monuments, demands to abolish the police and release incarcerated criminals – and explicit threats from ringleaders to literally “burn down” America.

In reality, as any objective assessment of the world reveals, America is hands-down the least racist, most diverse, multi-ethnic, tolerant and welcoming society on earth, which is why America remains the world’s No. 1 destination for immigrants of every nationality, ethnicity, color and religion.

So what’s really going on? 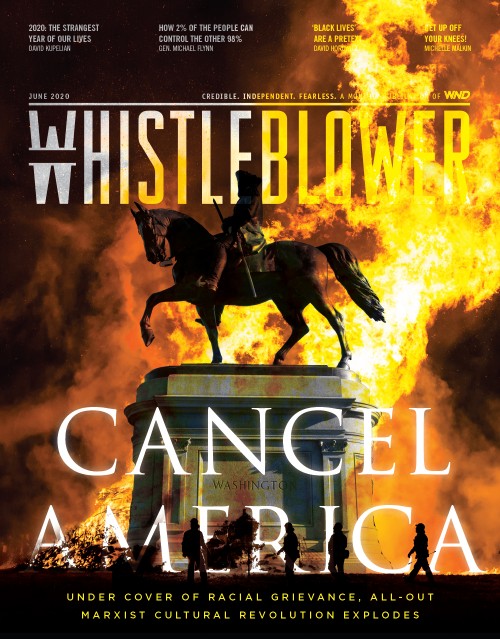 In the early days of the upheaval, reasonable observers tried to distinguish between peaceful protesters and mobs of rioters engaging in vandalism, arson, looting, vicious attacks on property (including many black-owned businesses), shootings and murder.

Their confusion was compounded by surreal scenes of middle class suburban white people kneeling en masse before Black Lives Matter activists and repeating, in unison, vows to stop being racist; whites shining the shoes and washing the feet of blacks; and even the formation of what amounted to entirely new nation-states within America, most notably CHAZ/CHOP in downtown Seattle.

But most bizarre – and genuinely threatening – has been the wholesale destruction of dozens of historic American memorials, starting with the Civil War era.

Well, some thought, maybe we shouldn’t celebrate Civil War heroes of the Confederacy because they backed slavery, so they essentially approved the desecration of the nation's historical monuments.

But then city after city saw statues of Christopher Columbus being torn down, along with America’s founding fathers, from George Washington to Thomas Jefferson. Radicals in Portland, Oregon, tore down a nearly 100-year-old George Washington statue and draped it with a burning American flag. The Jefferson Memorial in Washington, D.C., was defaced. In San Francisco, a statue of Francis Scott Key, who wrote America’s national anthem, "The Star-Spangled Banner," was toppled.

Still, some thought, These historical figures did own slaves, so while I don’t agree at all with tearing down their statues, I can sort of understand the rage of the protesters.

That delusion completely evaporated when wild mobs turned to attacking statues of Abraham Lincoln, who freed the slaves by signing the Emancipation Proclamation, and Ulysses S. Grant, the general (and later president) who led the Union to victory over the Confederacy. In Boston, rioters defaced the Shaw Memorial, a monument honoring the first all-volunteer black regiment of the Union Army in the Civil War, and in Madison, Wisconsin, they tore down a statue of Hans Christian Heg, a revered abolitionist who died trying to end slavery.

What on earth is going on? people asked. Why are they tearing down monuments to anti-slavery heroes?

Shaun King, co-founder of Real Justice PAC, even called for tearing down statues of Jesus Christ, along with “all murals and stained glass windows of white Jesus, and his European mother, and their white friends,” insisting their very existence constitutes "a form of white supremacy."

By now, many Americans finally realized this sustained violent campaign to destroy their country’s culture, memorials, history and core religion was not about combating “systemic racism” at all. A deeper and much more disturbing reality was emerging.

“The far left,” says author and Whistleblower Editor David Kupelian, “which today entirely possesses the Democratic Party, body and soul, has long used racial grievance as a cover for its true agenda. This includes the Communist Party USA, whose website, CPUSA.org, is perpetually dominated by articles decrying ‘police brutality’ and ‘rampant racism’ in America. It’s all a pretext. Their actual agenda is dismantling America's constitutional government and vital institutions, eliminating free-market capitalism and instituting a totalitarian socialist system in America.”

While the nation’s police are reviled, mocked and abused – over 700 have been injured during the riots – most Americans don’t realize the “protests” have been engineered and largely co-opted by openly Marxist/communist revolutionary groups including Antifa, Black Lives Matter and Refuse Fascism.

All three co-founders of Black Lives Matter proudly admit they are Marxists. BLM co-founder Patrisse Cullors says on video, “We actually do have an ideological frame. Myself and Alicia are particularly trained organizers – we are trained Marxists.” Recently New York’s BLM leader Hawk Newsome openly promised a violent revolution, telling Fox News’ Martha MacCallum, "If this country doesn't give us what we want, then we will burn down the system and replace it." To which President Trump responded by tweeting, "This is Treason, Sedition, Insurrection!"

Antifa, the masked, black-clad revolutionary alliance Trump has called a “domestic terror group,” has existed for many years and is made up largely of communists and anarchists. Ironically, though the name "Antifa" is a contraction of "anti-fascist," the violent, intimidating paramilitary organization is strikingly reminiscent of Mussolini's notorious Black Shirts.

Refuse Fascism, which has held recent rallies in Los Angeles, Cleveland, Chicago, Tulsa and elsewhere across the U.S., was formed by the Revolutionary Communist Party, is led by open communists, and is headquartered in the RCP's Revolution Books store in Harlem.

What about the all-important November election? The Democratic Party, for precisely the same reason openly Marxist groups continually decry “racism” and “police brutality” – namely, their desire to “fundamentally transform the United States of America” – has focused much of its 2020 presidential campaign on the proposition that America is irredeemably racist. Each primary candidate tried to outdo the other in expressing just how bigoted, predatory and immoral a country America is. Bernie Sanders insisted the U.S. was “created” largely “on racist principles,” Kirsten Gillibrand lectured suburban audiences about their “white privilege,” and Beto O’Rourke boldly declared: “This country, though we would like to think otherwise, was founded on racism, has persisted through racism, and is racist today.”

In explaining today’s all-out cultural revolution, there's one more hugely consequential factor: Millions of young Americans have been brainwashed in the nation’s colleges and universities, long the most far-left institutions in the country, some of which amount to little more than boot camps for creating militant leftwing activists.

“In elite universities, young people take on tremendous debt to fund their ‘education,” says Kupelian. “There, living in a hermetically sealed, cult-like environment cut off from the outside world, where dissent is both discouraged and punished, they are indoctrinated by radical Marxist, America-hating professors and rewarded for absorbing the far left’s bizarre identity-politics, social-justice worldview.”

Thus, says Kupelian, “Higher education has been ‘fundamentally transforming’ many young people into an army of angry, arrogant, historically ignorant, morally confused, America-hating foot soldiers – and now they have been called to active duty.”

Highlights of "CANCEL AMERICA” include:

If you prefer, you may order a single copy of the June 2020 issue, “CANCEL AMERICA.” Or GET THE DIGITAL VERSION HERE!