China has dominated our news coverage the last six months, and yet Beijing's grip on our freedom, our technology and lifestyle has been ever present for decades.

The demands on doing business there, the restrictions, intrusions and harmful advancements are not by chance, but design, as a means to take over as much of the world as we will allow them.

One person best-known for being able to see into the soul of the Chinese and decipher their meaning and agendas is Gordon Chang.

Mr. Chang is a Chinese American columnist, blogger, television pundit and author. He graduated from Cornell University, where he was a member of the Quill and Dagger society and graduated from the Cornell Law School.

His views are seen on most network and cable news shows as his in-depth research brings out facts and revealing insight to the subject at hand – Chinese domination.

We thank him for his time to take part in this look into China's future plans for America and the world. 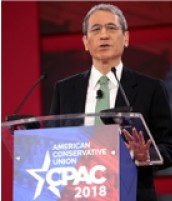 Ron Boat ~ We know that Asian countries take an exceptionally long view of their actions and intended results. Is China's true goal the takeover, the destruction of the United States? We're a good trading source, and it seems that any disruption would be costly – or are there other, unseen gains to bringing down our economy and our country? And are they on track, or have they been set back by the (intentional or unintentional) virus episode?

First, China says it is communist, which means it is dedicated to eliminating all sovereign states. It is, therefore, seeking the overthrow of the U.S. government.

Second, Chinese ruler Xi Jinping gives the impression that he believes he is the world's only legitimate ruler as he is attempting to impose China's imperial-era concepts on the world. The concept that underpinned the imperial tributary system was that peoples near and far were obligated to acknowledge Chinese rule.

In short, Chinese emperors claimed they had the Mandate of Heaven over tianxia, meaning "All Under Heaven."

Xi Jinping has employed tianxia language for more than a decade, but recently his references have become unmistakable. "The Chinese have always held that the world is united and all under heaven are one family," he declared in his 2017 New Year's message.

And if this is not enough, his foreign minister, Wang Yi, in Study Times, the Central Party School newspaper, in September 2017 wrote that Xi Jinping's "thought on diplomacy" – a "thought" in Communist Party lingo is an important body of ideological work – "has made innovations on and transcended the traditional Western theories of international relations for the past 300 years." Take 2017, subtract 300 years, and you almost get to 1648.

With his time reference, Wang is almost certainly pointing to the Treaty of Westphalia of 1648, which established the current system of sovereign states. His use of "transcended," consequently, hints that Xi wants a world without sovereign states – or at least no more of them than China.

The trend of Xi's recent comments warns us that his China does not want to live within the current Westphalian system or even to adjust it. China, in short, once again is revolutionary.

The coronavirus epidemic at first severely set back his ambitions, exposing the fundamental weaknesses of the Chinese regime. Yet as the disease spread around the world and struck down many in the United States, Xi evidently saw an opportunity to extend Chinese influence.

RB ~ Have American companies been giving up too much intellectual property and too much corporate control for the sake of 1) domestic profits and 2) entering the Chinese marketplace? In the past has our government been complicit in the one-way exchange of manufacturing and military secrets?

GC ~ Each year, China steals or forces the surrender of hundreds of billions of dollars of America's intellectual property. Beijing obtains some of this amount with forced-transfer rules, which require the surrender of intellectual property as a condition of entry into China's market. These rules violate China's World Trade Organization obligations.

A series of American presidents ignored these WTO violations. There are many weak actors here, some in government and some in business. We have, in short, been complicit in this grievous theft.

RB ~ Our national security is always at risk when we don't prepare or take prudent steps toward the little things that might bite us later on. Was it a goal of China or just our shortsightedness (or both) that allowed the movement of critical manufacturing elements such a medical equipment and devices, pharmaceuticals etc. to be outsourced? Was McKinsey and Company a major influence on this foreign invasion of our manufacturing sovereignty?

GC ~ America, due to corporate and governmental short-sightedness, outsourced critical manufacturing to China. The outsourcing was also the result of determined Chinese policy to attract factories and become the manufacturing platform of the world. Both Chinese and American goals coincided to create this disaster for us.

RB ~ Will America hold and, where needed, regain its position in the world against this growing societal and military threat, driven to dominate the world stage? What steps must it take to do so?

GC ~ Yes, we Americans will prevail. We have far more leverage over China than China has over us. At one point, it looked like we might lack the political will to protect ourselves from a militant Chinese state. Fortunately, we seem to have recovered our will because of the coronavirus epidemic.

In this epidemic, we have learned that China's communist system is not capable of meaningful reform. The only thing we can do, at least in the short- and intermediate-term, is to reduce our exposure to that regime.

So, to protect ourselves, we will have to cut our economic and financial ties with China. We are in the process of doing so.

RB ~ With the many internal abuses of imprisonment, labor camps, organ harvesting, forced abortions and other inhumane activities, will the world ever hold China accountable, or is it too big a market for profit to poke the hornet's nest? Will it ever lose its communist government and join the world of open, productive and free democratic societies?

GC ~ The coronavirus epidemic has dramatically changed American perceptions of China. It is not clear how the coronavirus first came to infect people, but it is evident that, once the disease took hold of China, Beijing deliberately spread the disease outside its borders.

China will be held accountable for all its crimes, coronavirus and other ones, because the deaths of more than 110,000 Americans cannot be ignored.

In any event, the Chinese market, laid low by disease, is not as attractive as it once was. China's economy is recovering far more slowly than many, inside and outside the country, first thought.

One day the Chinese people will get things right. They will have free markets and democratic institutions. That day could be tomorrow, or next century.

RB ~ I recently did an interview with Salih Hudayar, prime minister of East Turkistan. The struggles of the people in that country border on inconceivable. Any quick thought on that terrible intrusion?

GC ~ China's imprisonment of more than a million Uighurs and Kazakhs is a crime against humanity, as are its other "minority" policies in what it calls "Xinjiang." China's actions are reminiscent of those of the Third Reich before the mass exterminations, and at some point, the world will not tolerate the horror of enslavement. We know people are dying in those camps because the Chinese are building crematoria.

As much as American's love their cheap TVs, home accessories and drugs, and as I've written before, China is a Communist country. We cannot forget that in our daily dealings and future plans for our lives and our businesses. It's tough for many to realize, but not everyone is honest, forthright and open about their dealings with us, and the basic tenant of Communism is as solid as stated by Mr. Chang.

We sincerely appreciate his contribution to this interview. Be sure to follow Gordon Chang on Twitter @GordonGChang.