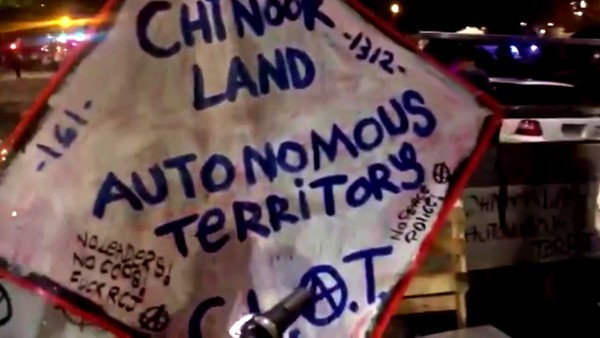 Now, CHOP 2.0 apparently is underway some 175 miles to the south in Portland, Oregon, where protesters early Wednesday began erecting tents in a park along with barricades, Fox News reported.

The Chinook people include several indigenous groups native to the Pacific Northwest.

"People are needed here ALL night long, especially in the early morning! Get on over rn! Bring some tents," the Twitter page said.

The group defines itself as a "decentralized network of autonomous youth collectives dedicated to direct action toward total liberation."

In Seattle, Mayor Durkan initially downplayed the June 8 seizure of a police station and several blocks of her city by radicals demanding the abolishment of the Seattle Police Department and the city's court system, suggesting it might turn into a "summer of love."

But after some of those radicals showed up at her house, and after murders, robberies, assaults and other violent crimes within the CHOP, she issued a 48-hour executive order July 1 to vacate the area.

Fox News reported downtown Portland businesses have suffered millions of dollars in property damage and lost sales amid ongoing protests over the past six weeks.

Democratic Mayor Ted Wheeler accused President Trump of having "escalated" tensions by deploying federal officers to his city earlier this month. On Tuesday, the mayor said "the best thing they can do is stay inside their building, or leave Portland altogether."

Wheeler said the goal "is to end these violent demonstrations quickly and safely."

But he told the AP that "in all the years that I have lived here, I have never seen the community more divided. Nor have I seen it look worse."

Gregory McKelvey, an activist critical of the police response, told the AP there's a "communications war over who's a 'good protester' and who's a 'bad protester.'"

"And what the police and the mayor are trying to do is turn the city against the people that are out protesting," he said.

"Each night’s protest is now turning into a protest of the night before's police activity. And so when people say we want this to stop, it can't stop because today's protest will be about what the feds or the Portland Police Bureau did yesterday," said McKelvey.