A friend of mine who miraculously survived a catastrophic plane crash, Mickey Robinson, just released his book, "Supernatural Courage – God's Secret Weapon for Your Victory." Dying, disfigured, disabled and darkened in sight, he cried out to God to save him and grant him a miracle. After being transported into a heavenly realm, he returned to earth to inspire people to courageously persevere. [Hear his astonishing story on "Here's the Deal" podcasts.] 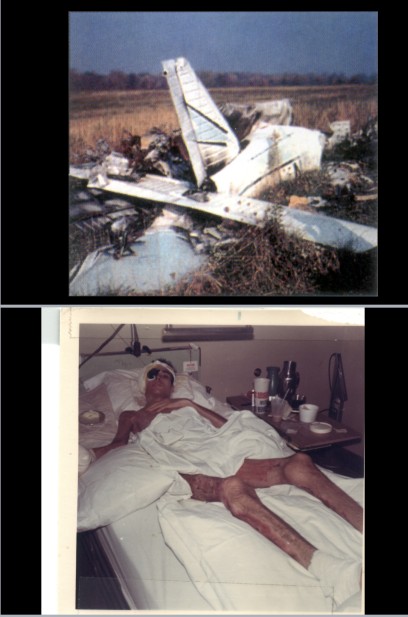 In these days of incredible evil and upheaval, God is using servants like Mickey Robinson to inspire and challenge us to rise to the occasion. Let's wholeheartedly respond while believing the famous quote from Billy Graham, "Courage is contagious."

Scripture calls us to follow examples like those in the Hebrews 11 "Hall of Fame." God promises, "I will make the godly of the land My heroes. …" (Psalm 101:6 TLB)

"For the eyes of the Lord run to and fro throughout the whole earth, to show Himself strong in the behalf of those whose heart is perfect towards Him" (2 Chronicles 16:9 KJV).

The Bible explicitly lists those cast in the lake of fire. It's significant who's listed first. May this jolt any Christian and especially pastors who have been silent and squeamish about uncompromisingly and courageously addressing the critical moral issues of our day.

"But the cowardly, the unbelieving, the abominable, the murderers, the sexually immoral, the sorcerers, the idolaters, and all liars shall have their portion in the lake which burns with fire and brimstone" (Revelation 21:8).

The warning given to the Laodicean church by Jesus Himself applies to us in this hour and especially to those who want to avoid being "political" and be more seeker-friendly, non-offensive and virtue-signaling that "we're cool and committed to church growth principles to attract maximum crowds and currency."

Mickey Robinson's testimony and book is timely in the face of these contentious times. Violence and anarchist activity we've witnessed alongside the incredible demonization and disrespect for leaders, law enforcement and long-standing institutions, indicates the "the devil has come down to you in great wrath, because he knows that his time is short" (Revelation 12:12).

"For our fight is not against flesh and blood, but against principalities, against powers, against the rulers of the darkness of this world, and against the spiritual forces of evil in the heavenly places. Therefore, take up the whole armor of God that you may be able to resist in the evil day, and having done all, to stand. Stand therefore ..." (Ephesians 6:12-14).

Dietrich Bonhoeffer, German pastor and prophet, martyred for taking a stand against Hitler and the Nazi socialists, told us to be bold and brave in the cause of Christ: "Silence in the face of evil is itself evil: God will not hold us guiltless. Not to speak is to speak. Not to act is to act."

Differentiating between the slogan "Black Lives Matter" and the organization led by three outspoken Marxist women (two of whom identify proudly as "Queer") requires discernment and courage to help others understand their leftist ambitions to replace our Judeo-Christian nation and rebuild it as a socialist state.

Defining "social justice" from a biblically informed worldview requires study and courage to identify with explicitly scriptural causes versus pop cultural counterfeits. There is a cost to courageous civic engagement, but with the silent screams of 61 million unborn babies aborted and millennia of defining marriage as between one man and one woman obliterated on our watch, passive preachers and cowering Christians are no longer acceptable.

I know the "cost" from personal experience as I was once warned by a church leader that if I proceeded with a biblical-based educational video, "10 Things Everyone Needs to Know About Gay Marriage," it would be a "deal breaker." Subsequently, I was let go and was told, "Just don't come back." How many pastors, educators and employees have likewise been shown the door in today's "cancel culture" for expressing views on the LGBTQ agenda, abortion or the idea America is steeped in "white supremacy?"

The prayer of Mickey Robinson and me and countless others who have "woke" to the urgency of the hour is for all of us to shake off all fear, share the truth and the gospel consistently and embrace civic engagement being "salt" to preserve our country from rot.

We are currently involved in a fierce battle for the soul of our nation. We're in the midst of a clash of civilizations, and we cannot and will not accept compromise or capitulation as an option.

"And let us not grow weary in doing good, for in due season we shall reap, if we do not give up" (Galatians 6:9).

When people try to slap a label on me, that I'm a "racist" or need to "demonstrate solidarity with the 'cause' by not standing to salute our Flag or for the national anthem," I will not surrender my obedience to God or my love for my country to appear noble and "with it" today.

I try winsomely yet confidently to educate many deceived and naïve individuals by simply telling them historical facts and the truth. I invite you to take the FREE 30 day "Bullseye Challenge" to learn how to be an informed influencer on the 30 hot button issues of our day.

"All that's required for the triumph of evil is for good men to say nothing."

Recently, a doctor wrote an article in our Tennessean newspaper promoting abortion and "reproductive health care." I spent time on a counter article exposing the falsehoods and propaganda, and this month "The Heartbeat Bill Cultivates a Culture of Life" rebuttal was published for the entire state to read!

There is no civilization in human history that did not have slavery as a part of its heritage. The United States is no exception. Yet we did not remain supporters of slavery but fought our worst war to abolish it. We were inspired by the example of Britain's courageous Christian leader, William Wilberforce, who worked tirelessly for 20 years to abolish it and died just days after it was accomplished!

It's a fact and takes courage to say that the Democratic Party is the party behind what I call the "Big 10 Scandals": slavery, secession, segregation, socialism, secularism, same-sex marriage, subpar education, statue demolition, slaughter of the unborn and "sex" redefined as any sexual orientation and gender identity a person wants. To be consistent, should America not only retire Aunt Jemima, Uncle Ben, Mrs. Butterworth and Lady Antebellum but this leftist political party, too?

Here's the deal: in this hour when the future of America hangs in the balance, Mickey Robinson has a message for us to be courageous Christians. On his deathbed, John Wesley wrote the following words to encourage Wilberforce to defeat slavery. Likewise, we should heed them in our defining moment:

"Unless the divine power has raised you up … I see not how you can go through your glorious enterprise in opposing that [abominable practice of slavery], which is the scandal of religion, of England, and a human nature. Unless God has raised you up for this very thing, you will be worn out by the opposition of men and devils. But if God be for you, who can be against you? Are all of them together stronger than God? Go on in the name of God, and in the power of His might!" – John Wesley