Editor’s note: Since evangelical Christians comprise America’s largest voting bloc, how evangelicals vote this November will largely determine the election’s outcome and along with it, the future direction of America for decades, perhaps generations.

Yet, although President Donald Trump’s agenda is undeniably more consistent with evangelicals’ values than that of today’s Democrats – on crucial issues from abortion to religious freedom – some evangelicals, including a number in influential positions, oppose Trump.

In his newest book, “Evangelicals at the Crossroads: Will We Pass The Trump Test?,” Christian author Michael L Brown, PhD., host of the nationally syndicated talk radio show “The Line of Fire” and founder and president of the FIRE School of Ministry, closely examines the sensibilities and arguments of both evangelical camps – pro-Trump and anti-Trump – and makes an enlightened, biblical and urgent case for reelecting Donald Trump.

Following is an excerpt from Brown’s book, aimed at evangelical Christians who are put off by Trump’s faults. 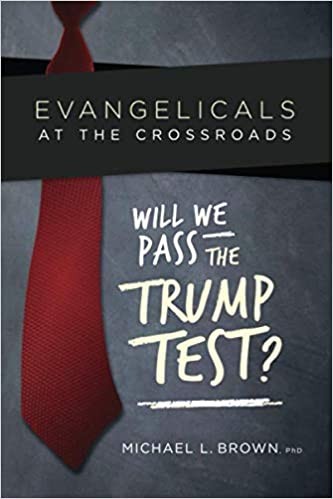 President Donald Trump is simultaneously dealing with some of the most vexing problems imaginable – from the coronavirus pandemic to massive economic challenges, from a Marxist cultural revolution exploding in America’s streets to finding a solution to the Middle East crisis, and from multiple dangers posed by hostile nations like China and Iran to the long-term campaign by the global power elite to end America’s sovereignty and leadership in the world.

Put in in that context – the context of Trump combating all these huge problems at once – should we be so concerned about his juvenile tweets? Or his insulting comments at campaign rallies? Or his exaggerations and misrepresentations? After all, if he is successfully fighting both a national and global ideological war, doesn’t that greatly outweigh his other faults?

This is not to minimize his faults or the negative fruit of his words. As a follower of Jesus, I abhor some of his behavior, and, from a pragmatic viewpoint, he is his own worst enemy. My purpose here is to put Trump’s strengths and weaknesses into a larger global context.

Thinking in terms of COVID-19, let’s say that, God forbid, the virus became so severe that it threatened the lives of 50 million Americans. And let’s say that our government had to decide between two famous specialists who would lead the war against this deadly disease.

One of the specialists was famed for his personal kindness, his strong marriage, and the respect with which he treated his peers. Yet, when it came to effectively treating a virus of this kind, he had a disastrous track record.

The other specialist was married four times and was infamous for his nasty tongue and prideful comments. Yet he had an incredible track record of saving millions of lives when confronting similar epidemics in other countries. Who would we hire for the job?

As an American whose own family was being threatened with terrible loss, what specialist would you want at the helm? Would you want the nice family guy who had a poor track record in combatting similar plagues? Or would you want the nasty-tongued, prideful, oft-married man who was known for stopping these diseases in their tracks?

We could go on with hundreds of similar examples. If your family was trapped in a burning building, would you want the best firefighter to rescue you (even if he used profanity and his kids hated him)? Or would you want the nicest, yet worst, firefighter? What about a doctor performing heart surgery on your infant? Or a general leading your son into battle against terrorists? Or even the local dog catcher, tasked with rounding up Rottweilers with rabies?

In each case, our criteria would not be: How is his marriage? Or, do his kids respect him? Or, is he into pornography? Or, does he use a lot of profanity? Instead, our primary question would be: How well does he do his job?

We think like this all the time in everyday life. Your friend asks you to recommend an exterminator. You reply, “Well, there’s a guy we use who is terrific. He is very thorough and has eliminated virtually all the bugs from our house. But to be honest, I don’t know a lot about his marriage. And I’ve heard him use profanity at times. So, I’m not sure I can recommend him.”

Your friend would probably reply, “Honestly, with the problem we have with roaches and termites, I’m not really concerned about his marriage. And I can keep the kids away from him if he has a bad mouth. I just need someone to get rid of these pests!”

It would be the same with a more serious recommendation, such as with a heart surgeon. Did you ever think of asking, “What’s his (or her) marriage like? And how does he (or she) treat the staff?” Instead, you want to hear, “I can tell you firsthand that this is the number one heart surgeon in our city. I wouldn’t trust anyone else to come near me (or my family) with a scalpel.”

In the same way, when it comes to the president, we don’t want a hothead who could needlessly start World War III. We don’t want a liar who can’t be trusted. We don’t want someone who is so divisive and mean-spirited that he tears the nation in two. Character does count and morality does matter.

It’s just that character and morality are multifaceted, and for many of us, a president who will fight for the life of the unborn demonstrates good character. The same with a president who will combat Islamic terrorism. Or stand for religious liberties. Or push back against a dangerous globalism (aka the New World Order). Or stand up to the repressive regime of China.

And while we regret many of the president’s words and actions, knowing they do real damage as well, in balance, we think he’s the best man (among possible current candidates) for the job.

In the measured but strong words of Christian journalist Steven Strang, “This is the very reason Trump’s reelection is so important. He is a historic political reformer who has totally changed the geopolitical narrative to the real issue of our time: nationalism versus globalism. The global establishment has seen, in two years, its one-hundred-year plan for a total consolidation of its financial, political, and institutional power into a world government implode before its very eyes.”

It’s the same when it comes to Israel and the Middle East. Many evangelicals believe that God cares about our relationship with Israel and that He truly blesses those who bless Israel. They also believe that our alliance with Israel is important for world security and Middle East stability, and they feel it is very significant that it was Donald Trump, not Bill Clinton or George W. Bush or Barack Obama, who moved our embassy to Jerusalem. And, while we do care about justice and equity for the Palestinians, we believe that we cannot throw Israel under the bus for the sake of a Palestinian state (or to appease Muslims worldwide).

Here, too, we find Trump’s consistent, strong pro-Israel stance much more important than his shortcomings. In fact, we find it hard to compare the courage that it took for him to move our embassy to Jerusalem with his narcissism in a press conference. While we do not like the latter, we are willing to tolerate it for the former.

Early in 2020, I was picked up at an airport in Australia by a Chinese driver. He was born in China but came to Australia to study twenty years ago, ultimately moving there and becoming a citizen. He had also become a Christian.

Yes, for this Chinese Christian, now a citizen of Australia but with his parents still living in Communist China, Trump was a global hero, a man with the guts to stand up to China, a man with the guts to stand with the protesters in Hong Kong. Do you think he cares if Trump talks about himself too much or if Trump can be cruel to his political foes? Not in the least. For this man, Trump was doing the right thing where it mattered most, and that’s what mattered to him.

Evangelical author Bert Farias wrote that, “For more than two centuries the United States of America has been one of the most prosperous and powerful nations of the world. Its military power and its economic superiority actually hold the world together. If the U.S. crumbled or imploded, China would take over the whole of the Far East. Pakistan and India would more than likely break out in war, as both possess nuclear weapons. Iran would cause unlimited chaos and madness in the Middle East. These are just a few examples of what could happen.”

According to Farias, who shares the sentiments of many evangelical Trump supporters, “God foresaw that this hot-blooded and temperamental man would have the backbone and character to stand up against the hordes of demonic forces that were intent on destroying our nation.”

Obviously, from this perspective, the stakes are very high.

As for the alternatives to Donald Trump, Farias opines, “I must honestly say: I cannot imagine how any true Christian or Messianic Jew could be a Democrat today. It is quickly morphing into a Marxist socialist, violently atheistic party with great greed for power. One cannot read his Bible and be a leftist liberal democrat. You have to feed on humanistic ideologies and go to humanistic schools to be one.”

Again, I don’t write these things (or, really, anything in “Evangelicals at the Crossroads”) with the goal of minimizing Donald Trump’s failings. Rather, I write this to explain why so many God-fearing, morality-loving, Bible-believing Christians can enthusiastically vote for Trump. The picture is much bigger than the man himself.

Dr. Michael Brown’s “Evangelicals at the Crossroads: Will We Pass The Trump Test?” is now available on Amazon in both paperback and Kindle versions.