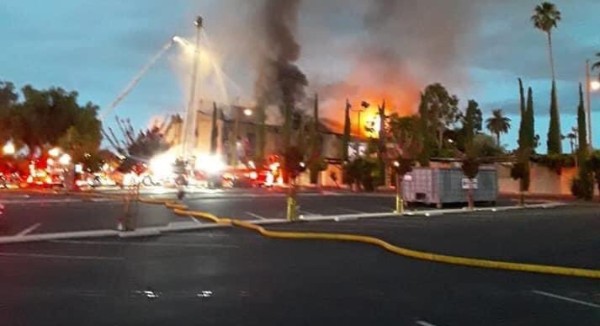 The charred pews and collapsed roof looked like the work of ISIS torching its way through Mosul, but the target was the 249-year-old church as Mission San Gabriel in California, and the perperators were rioters claiming their cause was racial justice.

It was just one attack on churches among five within 48 hours the weekend of July 11-12, noted Tony Perkins, president of the Family Research Council, in a column published by the Daily Signal.

Establishment media aren't covering the attacks on churches, Perkins said, because it does want "to expose this movement for what it is — a sham of racial equality and a revolt against the rule of law rooted in the transcendent truth of God."

Perkins said Americans, "especially Christians, are making a huge mistake burying their head in the sand thinking this, too, shall pass."

"It will pass, all right, along with our freedoms if we don’t wake up to the threat," he warned. "Some mayors and leaders made the mistake that if we just feed the mobs a few statues, they'll go quietly into the night."

In Florida, a 23-year-old arsonist who laughed to police that he was on a "mission," crashed into the sanctuary of Queen of Peace Catholic Church in Florida while congregants were praying then set fire to the building. A historically black church also was a target, with Calvary Baptist in San Diego watching its building for children’s ministry burn to the ground.

In New York City, mobs made bonfires out of two Virgin Mary statues, with words such as "IDOL" scrawled black paint. Even a Jesus sculpture was decapitated.

Perkins believes the violence is not about the death of George Floyd but, rather, a "smokescreen" for the real agenda of fundamentally transforming America.

Black Lives Matter leaders boast of being "trained Marxists," he noted, and Marxism has no place for God.

Perkins cited progressive activist Shaun King saying "all murals and stained-glass windows of white Jesus and his European mother and their white friends should also come down."

"They are a gross form of white supremacy created as tools of oppression, racist propaganda," King said.

But Perkins said it's not about Jesus being white -- he wasn't -- but about "hating what Jesus and these churches represent: Truth."

'What a difference five years makes'

"They don't really want to reach an agreement," Black said. "They skulked forward hiding behind the skirts of respectable reform organizations who wish equality and brotherhood in America."

Perkins commented: "Now, our monuments aren't just paying for it, but our faith communities too."

He recalled scholar Victor Davis Hanson observing when ISIS marched through small Iraqi towns, destroying ancient artifacts and sacred sites that the West was appalled, priding itself "on the idea that liberal societies would never descend into such nihilism."