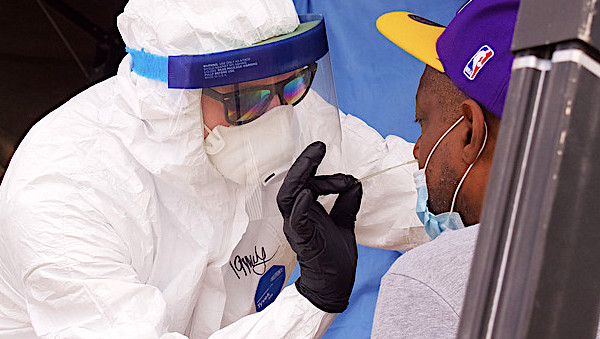 The double standard for public gatherings amid social-distancing orders has been irking many for weeks.

Many public officials have endorsed the demonstrations since the death of George Floyd. But restrictions remain on churches and other places where people gather.

Now, Fox News reports some big-city officials are admitting that the protests "may have contributed to surging coronavirus rates."

Officials in Los Angeles, Seattle and Miami-Dade County conceded a link between the protests and new COVID-19 cases was at least possible while others insisted there was no evidence of a rise.

New York Mayor Bill de Blasio's deputy press secretary, Avery Cohen, told Fox News, "Based on our health indicators, which measure hospital admissions, number of people in ICU and percentage of New Yorkers testing positive, we have seen no indication of an uptick in cases."

However, WNBC-TV in New York reported that in the past week New York's "daily death toll has stayed constant, but its percentage of positive coronavirus cases rose four days straight."

Los Angeles, Seattle and Miami all have seen spikes of COVID-19 cases in recent days, the report said.

Cohen wrote on Twitter: "Are you ready to flood the streets to fight for Blacks lives and against police brutality and reclaim our roots of pride? Join us today."

The invitation came after de Blasio threatened the Jewish community, saying "the time for warnings has passed," after he noted a funeral that violated social distancing rules.

Garcetti said the protesters are not "maintaining physical distancing."

A spokesman for Carlos A. Giménez, the mayor of Miami-Dade County, told Fox the protests were a "contributing factor" to the local coronavirus spike.

Seattle Mayor Jenny Durkan's office referred Fox to James Apa, a city health official, who he said the protests may have played a role in new cases.

Apa told Fox: "No single exposure site has been the primary driver for our increase in cases. Top contributors include infections from other people in households, essential workers being exposed on the job and infections within long term care facilities. From what we can tell, protests were not a major factor."

He said a small percentage of those infected had been at protests.

Minneapolis Mayor Jacob Frey had warned that church worship services could be a "public health disaster." His administration then handed out masks to demonstrators.

Washington, D.C., Mayor Muriel Bowser, had promised penalties of 90 days in jail for those violating her lockdown orders.

At the same time, she praised the mass protests as "grieving" over hundreds of years of racism.

What Biden should have the National Space Council do

Will Critical Race Theory ideologues learn the lesson from 'defund the police'?