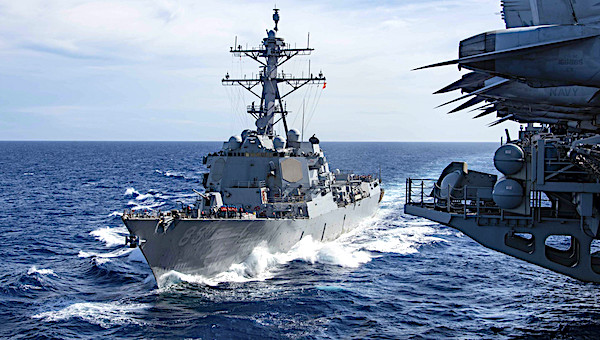 One of the many issues that developed in recent weeks because of the coronavirus shutdowns was a U.S. Navy order that briefly banned personnel from attending religious services.

That shouldn't happen in America, says Rep. Doug Collins, R-Ga., responding to an order that personnel not attend indoor religious services under the threat of court-martial because of COVID-19.

The order was reversed, but Collins has introduced an amendment to the 2021 National Defense Authorization Act to prevent similar orders in the future.

It would ban "any guidance, order, or regulation that restricts – on the basis of public health – any service member’s attendance at religious services or gatherings if similar guidance does not exist for other gatherings."

Just before the Navy reversed course, Collins said he had told Defense Secretary Mark Esper that "singling out religious gatherings while allowing other activities and unrestricted social gatherings to take place is unlawful, and I’m glad the Navy acknowledges that."

But while "this is a step in the right direction, changes still need to be made," he said.

"For too long, the Pentagon has turned a blind eye as our military leaders have completely disregarded their obligation to protect the religious freedom of its service members," Collins said. "I look forward to sitting down with Secretary Esper and leaders at the Department of Defense to further discuss how we can protect religious freedom across all branches of our military."

Collins had joined with Rep. Doug Lamborn, R-Colo., in the letter to Esper.

"Given the years-long record of the DoD’s actions in contradiction with federal law protecting religious liberty, it is clear to us that the DoD has either willfully ignored or is unaware of its obligations to protect the religious freedom of its service members," the congressmen said.

"While we can all agree that the health and safety of our troops is critical during the ongoing public health crisis, singling out religious gatherings while allowing other activities and unrestricted social gatherings to take place is unlawful. To enforce that prohibition under threat of court-martial is unconscionable and provides yet another example of why change is sorely needed at the Pentagon."

They noted that the U.S. Army also recently had restricted the religious liberties of chaplains and service members.

"We continue to witness failures to correctly apply federal law protecting the religious freedom of our brave men and women in the military. In fact, in the Army’s letter postmarked June 11, 2020, we were told that the Army has 'developed and implemented comprehensive policies and training concerning religious freedom.' If that is true, why do we continue to hear from members of the military legal and chaplain communities that no such training exists?" the members of Congress asked.

They said the military needs to provide an explanation of the policies and training concern religious freedom, a description of how and when such guidance is circulated and more details about the recent orders.