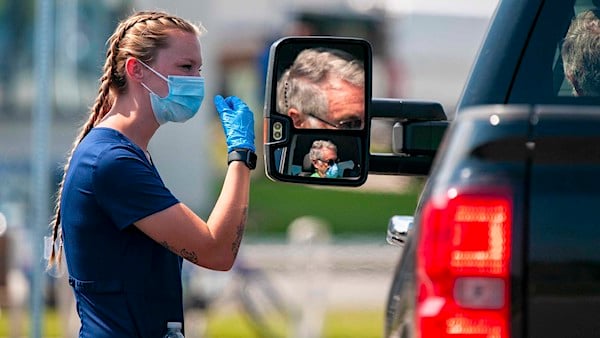 With much of the media focusing solely on the rising number of cases of coronavirus, many Americans may be unaware the actual death rate for COVID-19 has been plunging, according to the U.S. Centers for Disease Control.

"Based on death certificate data, the percentage of (total U.S.) deaths attributed to pneumonia, influenza or COVID-19 (PIC) decreased from 9.0% during week 25 to 5.9% during week 26, representing the tenth week of a declining percentage of deaths due to PIC," the CDC reports.

"The percentage is currently at the epidemic threshold but will likely change as more death certificates are processed, particularly for recent weeks."

The epidemic threshold is less severe than one for a pandemic.

The continuing drop is now being echoed by some, including the editorial board of Issues & Insights, which says:

"The media and many politicians inside the Democratic Party continue to shriek over the recent jump in the number of recorded coronavirus cases, seeking to keep the economy closed at all costs -- and we mean that literally. Don't fall for the argument. The data show that, in fact, our pandemic nightmare might well be coming to an end." 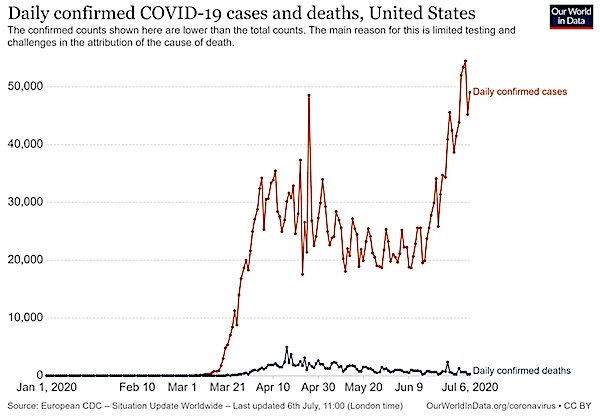 Dr. Scott Atlas is a senior fellow at Stanford University's Hoover Institution, and in an interview with KUSI-TV in San Diego, he explained there's no need for fear mongering when looking at higher numbers of cases being reported.

"When you look all over at the states who are seeing a lot of new cases, you have to look at who is getting infected because we should know by now, that the goal is not to eliminate all cases, that's not rational, it's not necessary, if we just protect the people who are going to have serious complications," Atlas said.

"We look at the cases, yes there's a lot more cases, by the way they do not correlate in a time sense to any kind of reopening of states. If you look at the timing, that's just a misstatement, a false narrative. The reality is they may correlate to the new protests and massive demonstrations, but it's safe to say the majority of new cases are among younger, healthier people."

Despite the increase in coronavirus cases, he stressed the death rate is not on the rise.

"And that's what really counts, are we getting people who are really sick and dying, and we're not, and when we look at the hospitalizations, yes, hospitals are more crowded, but that's mainly due to the re-installation of medical care for non COVID-19 patients."

Citing Texas as an example, Dr. Atlas explained: "90+% of ICU beds are occupied, but only 15% are COVID patients. 85% of the occupied beds are not COVID patients. I think we have to look at the data and be aware that it doesn't matter if younger, healthier people get infected, I don't know how often that has to be said, they have nearly zero risk of a problem from this. The only thing that counts are the older, more vulnerable people getting infected. And there's no evidence that they really are."

Meanwhile, Dr. Scott Jensen, a physician of 40 years and Republican state lawmaker in Minnesota, is under investigation by the state for his comments regarding COVID-19. 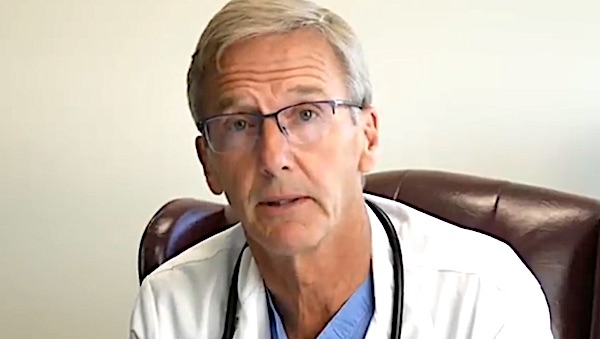 KSTP-TV reports Jensen "said that he was notified by the state Board of Medical Practices that he is under investigation for allegedly spreading misinformation regarding death certificates in relation to the COVID-19 pandemic. They also say that he provided reckless advice as a physician by comparing COVID-19 to the flu. Jensen has accused the state of inflating the number of deaths from COVID-19."

Dr. Jensen posted a video on Facebook regarding the probe, in which he said:

"When I got this letter, I was ticked, and quite frankly, I leaned into the comfort and wisdom of my family to let them talk me off the cliff. But doggone it, if this can happen to me, my view is it could happen to anybody."

"You know what he did? He properly identified that a bunch of people who did not die from COVID-19 were listed as having died because of it. They died with it, not of it. Something else killed them, but they also had the infection so they were written up as having died from COVID-19. He pointed out the difference. He is under investigation by the Ministry of Health," Limbaugh said.

"Well, you know, Dr. [Anthony] Fauci also compared COVID-19 to the flu way, way back in February. Dr. [Deborah] Birx said that the CDC should be causing death totals to be inflated by 25%. She's acknowledged that they are inflating the number of COVID-19 deaths. This doctor did the same thing."

"This is how revolutions work, folks. You do not speak out against the regime. The regime will get you every time. The regime, in this case, the Democrat-controlled state of Minnesota."

Limbaugh also commented on the rise in coronavirus cases, saying: "Some of these new cases are a direct result of Black Lives Matter, Antifa, and all these revolutionaries out there violating all the requirements from Dr. Fauci and the CDC. But they never get called on it. Only you people that go to bars, only you people that go to beaches and restaurants, you get called on it. The revolutionaries don't."

Dr. Fauci downplayed the plunging coronavirus death rate Tuesday, saying: "It's a false narrative to take comfort in a lower rate of death. There's so many other things that are very dangerous and bad about this virus," and warning the public not to "get yourself into false complacency."