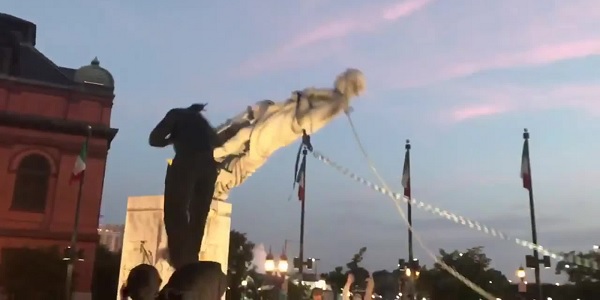 Amid the debate over America’s monuments, a new poll reveals that an overwhelming majority of voters disapprove of the removal of historic statues perceived by some as offensive. The poll, which equally surveyed registered Democrats and Republicans, showed that 74% of respondents agree with President Trump that monuments should not be removed.

It remains unclear how the controversy will affect the November election. Already, this summer has been upended by an extraordinary series of events, including the ongoing public health crisis and protests in response to the tragic death of George Floyd. What began as an outcry against abuses by police has led to unprecedented soul searching about the issue of race in America, including the propriety of statues honoring the nation’s former leaders.  There are understandably strong feelings over the display of statues that honor leaders of the Confederacy, but the recent indiscriminate destruction of statues and monuments resembles a dystopian plot line about suppressed history and silenced dissenting voices.

Understanding the current cultural context is key to understanding the controversy surrounding America’s statues. Defacing and vandalizing public memorials are the latest manifestation of the “cancel culture” that seeks to punish individuals for past actions or views ranging from unjust to merely out of step with today’s prevailing zeitgeist. Recently, this illiberal crusade instigated the outing of Boeing Communications Chief Niel Golightly, who resigned after a colleague complained about a 1987 article he wrote arguing that women should not serve in combat. Despite Golightly’s change of view, Boeing forced him out.

Others, including comedians, politicians, and even pastors have had to scramble to atone for whatever landed them outside the good graces of the cultural elite. While the cancel culture movement is problematic for many reasons, the latest trend to “cancel” historical figures especially underscores the consequences of historical illiteracy.

The first downed statues were those erected to Confederate leaders such as Robert E. Lee and Jefferson Davis. However, non-Confederate statues are now also targeted. For example, a statue of George Washington was vandalized and torn down in Portland, Ore.; a statue of abolitionist Matthias Baldwin was defaced in Philadelphia; and a statue of African American abolitionist Frederick Douglass was destroyed in Rochester, N.Y. Monuments to members of the Union army have been victimized, including statues of President Ulysses S. Grant in San Francisco, Adm. David Farragut in Washington, D.C., and abolitionist Hans Christian Heg in Madison, Wis. A monument to the Union’s 54th Massachusetts Regiment — which consisted of all-black volunteer soldiers — was defaced in Boston.

Destroying monuments of abolitionists, Union generals, and black Union soldiers breaks with the narrative of the justice-seekers for George Floyd and defies common sense. But recent calls to “cancel” the Freedman’s Memorial in Washington, D.C., are perhaps even more problematic because they are symptomatic of a simplistic approach to history — one to which far too many Americans fall prey.

The Freedman’s Memorial was unveiled on April 14, 1876, the 11th anniversary of President Lincoln’s shooting. With over 25,000 people present — including President Grant, his Cabinet, and justices of the Supreme Court — Frederick Douglass delivered the keynote address.

The monument depicts two men: President Lincoln holding a copy of the Emancipation Proclamation and a freed slave modeled after Archer Alexander, the last slave to be captured under the Fugitive Slave Act. The former slave is depicted on one knee, about to stand up, with broken shackles at his feet. Notably, funds for the statue came predominantly from formerly enslaved people; Charlotte Scott, a freed slave, donated the first $5.

Opponents of the statue object to what they perceive is an overt paternalistic design — not a completely unfounded concern. Lincoln is depicted standing upright while the former slave appears to be kneeling. Furthermore, in a recently unearthed letter to a local paper, Frederick Douglass, despite dedicating the statue, admitted reservations about its design: “Admirable as is the monument … it does not, as it seems to me, tell the whole truth, and perhaps no one monument could be made to tell the whole truth of any subject which it might be designed to illustrate.” Douglass notes the crux of the problem, “The negro here, though rising, is still on his knees and nude.”

We ought to take a nuanced, historically informed view of removing statues and memorials. This, in part, means rejecting the rush to erase the past and recommitting to learning our history. This history, while complicated and full of imperfect people, is worth remembering, learning from, and sometimes celebrating.

In his letter to the editor, Douglass notes, “What I want to see before I die is a monument representing the negro, not couchant on his knees like a four-footed animal, but erect on his feet like a man.” Rather than calling for the monument’s removal, he adds, “There is room in Lincoln park for another monument, and I throw out this suggestion to the end that it may be taken up and acted upon.”

Americans should reject the impulses of cancel culture, which has a simplistic view of history. We should remember that history is a story of multifaceted people and events. Instead of removing the Freedman’s Memorial, perhaps we should follow Douglass’ advice and build another statue in Lincoln Park — maybe to the great orator himself — that more completely tells the story of America’s continuing journey to fully realize our founding ideals.

David Closson is a research fellow for religious freedom and biblical worldview at the Family Research Council.