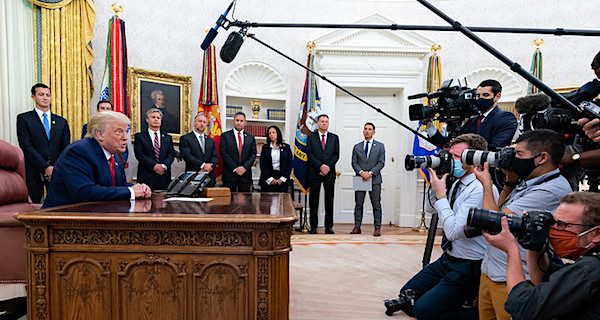 The U.S. Supreme Court decisions opening the door for House Democrats and a prosecutor in New York to see President Trump's tax returns and other personal documents were an assault on the Constitution's separation of powers, contends Alan Dershowitz.

The Harvard emeritus law professor wrote in a column for the Gatestone Institute that in the short term, the decisions helped President Trump because they mean his documents probably will not be opened before this fall's election.

The court said the prosecutor probably had a right to see the returns, and the Democrats might but sent them both down to lower courts for review.

Dershowitz said the rulings also may "constitute a setback for the power of the presidency and our system of separation of powers and federalism."

"The argument against allowing state prosecutors to rummage through a sitting president's papers and documents is that there is no limiting principle," he said. "If the district attorney of Manhattan can conduct an investigation and subpoena documents, so can the district attorneys of every city and county across the United States. There would, of course, have to be a jurisdictional nexus between the president and the jurisdiction investigating him."

Dershowitz said that "for a former businessman like Donald Trump, that would cover hundreds of jurisdictions in which he and his companies did business."

"A president who received subpoenas from hundreds or thousands of local jurisdictions could become overwhelmed by the task of assisting his lawyers in thoroughly vetting them for claims of privilege. This is not a fanciful prospect in our current age in which the criminal justice system has been weaponized by both parties seeking partisan advantage," he said.

"I guarantee you that the next democratic president will be investigated, not only by Congress — if either house is in the hands of the opposing party — but also by ambitious local Republican attorneys who have any plausible jurisdictional claim that is within the statute of limitations. A sitting president, like any other citizen, can move to strike subpoenas on several grounds, but that takes time and energy. Moreover, courts generally rule in favor of prosecutors in such cases," he said.

Dershowitz said it's reasonable that some people are exempt from certain laws, and that doesn't make them "above the law."

"That is the law," he said. "For example, members of Congress cannot be held criminally or civilly accountable for action taken (with few exceptions) while in, or on the way to and from, Congress. In other words, a senator cannot be prosecuted while driving drunk to a Senate debate. The rest of us can be arrested for driving drunk to our jobs. Judges, too, have broad immunity for what they do and say on the bench. It should come a no surprise, therefore, that presidents are exempted from certain laws that are applicable to the rest of us. They cannot be prosecuted while serving in office. That, too, is the law."

Dershowitz said it's logical that investigations may need to collect evidence "while the president is in office to be used after he leaves office."

But he said that even before the recent opinions, there was no barrier to a prosecutor interviewing witnesses.