Main Street is rearing up to meet Democratic Montana Gov. Steve Bullock in protest following the controversial institution of a face covering mandate within the state.

According to the Helena-based Independent Record, the executive mask order, put in place on July 15 for any county with four or more active COVID-19 cases, required that all state residents age 5 and above wear a mask while visiting enclosed public spaces including businesses, government buildings and communal transportation facilities. Private businesses were also asked to post signage detailing the policy.

As in other states, countless exceptions were outlined. Masks could be removed for eating, drinking or participating in a socially distanced speaking engagement.

"Unfortunately it has become clear we need to do more, and that asking folks to do the right thing just isn't always going to be enough," Bullock said.

"Inability to control the spread of COVID-19 endangers vulnerable Montanans. It endangers businesses who want to keep their doors open," Bullock said. "Too many continue to congregate in larger gatherings where a single person can spread COVID-19 to many others and too few are wearing face coverings."

The governor also referred to the mandate as a "modest imposition" in the grand scheme of things, intended to clear the way for suppressed viral transmission and continued economic operation.

Montanan business owners, however, saw things differently -- and following suit with their counterparts in other heavily restricted states around the country, they continued conducting business as they saw fit.

Bob's Valley Market in the state capital of Helena was one such business, heralded on social media by locals for a relaxed on-site mask policy.

Photographs of signage posted around the market indicate that, while face coverings were technically required, employers were not to question customers without a mask due to owner Steve Bartmess' reverence for the personal and medical right to privacy.

Instead, customers without masks were to be automatically treated as one of the many state residents exempt from the mandate as a result of underlying health conditions, allowing substantial cover for those customers simply unwilling to wear a face covering.

In Eureka, the owners of Heavens Peak Organic Market and the Montana Shipping Outlet were all the more outspoken in opposition to the policy.

"We don't wear masks. We wear firearms," Montana Shipping Outlet owner Matthew Barrett told The Western Journal. "That's my official position in my store. Anybody else who walks in is free to do whatever they would like but I'm not buying into the governor's edicts. He has no authority, no power, regardless of whatever law he may quote and whatever court case he may quote."

"I live by the Constitution here, as do most of my fellow Montanans," he said.

At 61 years old, Barrett had never in his life attended a physical protest. When statewide lockdown orders were issued in April, that changed. The business owner was one of several hundred state residents to attend demonstrations against the order in Helena.

Located off the main drag and frequented largely by Canadian customers now unable to enter the country, the Montana Shipping Outlet was not at high risk for viral transmission, Barrett said. And months of inconsistent restrictions came as no more than an additional barrier to doing business.

"I've been ticked off for quite a while now," Barrett said. "Regular people walking around do not pose a threat to other people. And if any of those regular people are sick, well, then it's on them to not even be out there in the first place -- so don't put it on me."

On July 17, the LCHD threatened legal action against Heavens Peak for violating the order in a written warning letter obtained by The Western Journal.

According to the letter, each day in violation of the policy constituted an individual offense, punishable by up to 90 days imprisonment and a fine not exceeding $500. 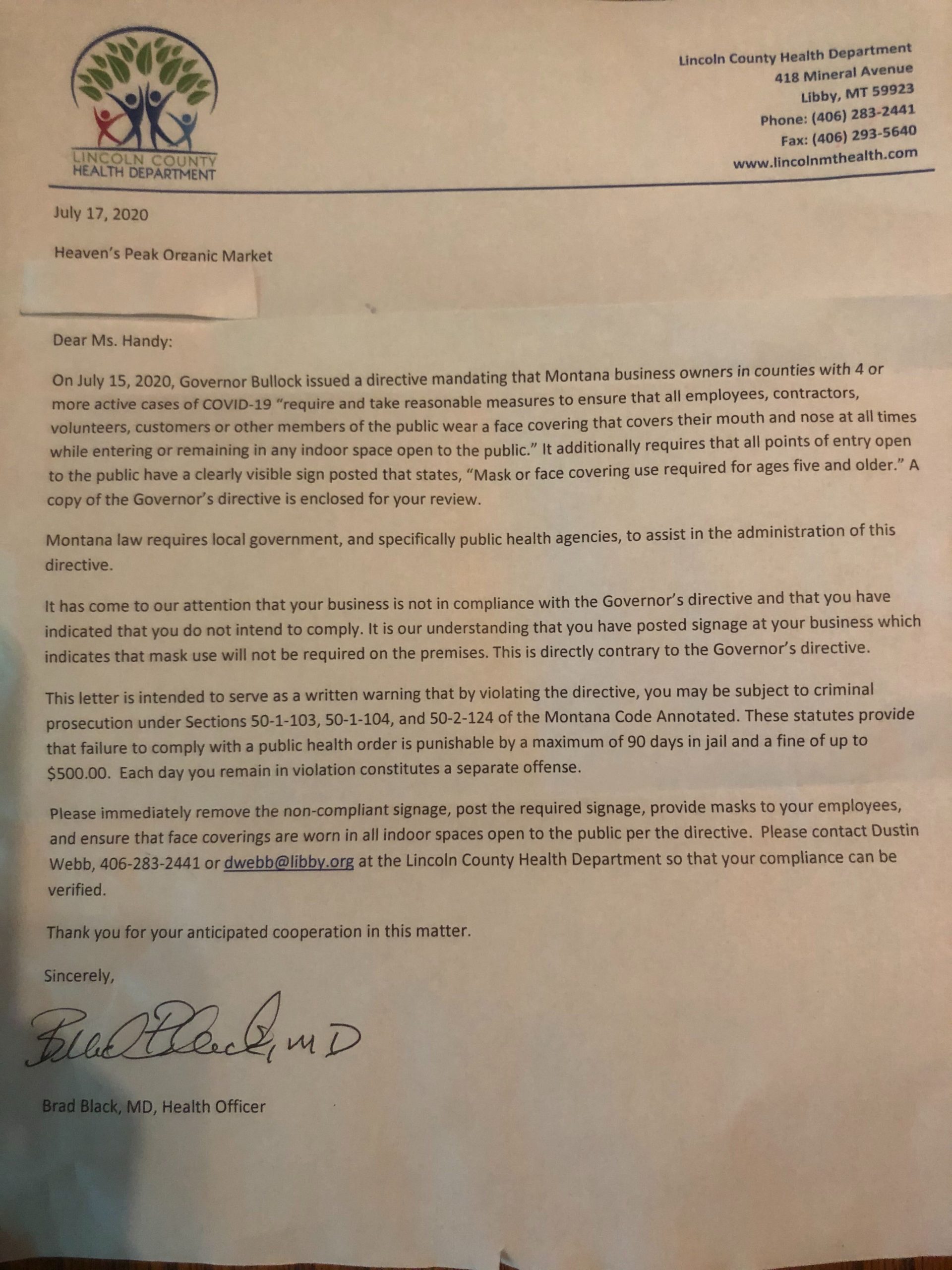 Handy said any such actions taken to enforce the policy would be met with a countersuit. The business owner had no intention of changing her policy or living in fear.

"The Bible says not to live in fear and we're not supposed to react out of fear," Handy said. "But it is very frustrating when a government is trying to mandate things that have to do with your person. It really is not about the virus. It is about control."

"This is communists. They just want people to conform," she added.

"Enough is enough. We need to start making a stand because what are we going to do next when it's a little more aggressive, you know?"

According to Barrett and Handy, numerous other businesses have also joined in shrugging the Montana mask mandate -- to no shortage of local fanfare and a wide array of enforcement actions.

The Western Journal reached out for comment to several of these businesses, as well as the Lincoln County Health Department, but did not immediately receive a response.