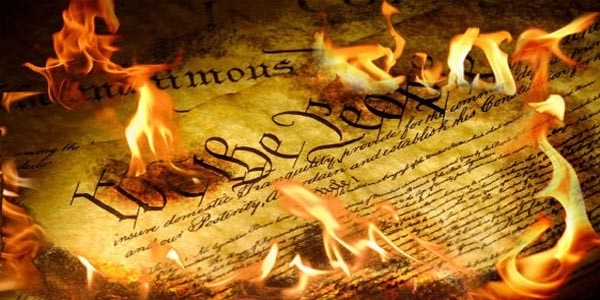 What, to an American, is this Fourth of July? Six weeks into the wave of rioting and nihilism sweeping the nation, as our long-simmering cold civil war gets hotter, it seems hard to find cause for celebration on our beloved country’s 244th birthday.

Elites and their coalition of the aggrieved have ramped up the assault on patriotic Middle America. What began as an urban intifada has since become another wave in the unfolding post-1960s Cultural Revolution. The aim, as always, remains the overthrow of the country’s culture, way of life, and republican ideals.

First Amendment notwithstanding, the U.S. is acting like a budding totalitarian theocracy, one in which all must kneel at the altar of wokeness. Those who refuse are not punished by the state—not yet, anyway—but by corporate America and the media. They run the risk of losing their livelihoods and being forever defamed on the internet.

How long until those accused of racism are denied, say, banking services? In the meantime, it is increasingly unclear whether heretics who defend themselves against assault can expect equal protection under the law. Even relatives of the accused are fair game.

None of this is in any way comparable to being sent to the gulag, but the Land of the Free this is not. Woke propaganda is now all pervasive, its lies and distortions embedded into every corner of our public life. And unlike the educated elites in the late Soviet Union who had lost all faith in Communism, our elites actually believe the lies about systemic racism and the “Legalized Genocide of Colored People.”

Underlying this revolution is a bedrock belief that whites are uniquely evil—“the cancer of human history,” in Susan Sontag’s infamous formulation. “It is the white race and it alone—its ideologies and inventions—which eradicates autonomous civilizations wherever it spreads,” she wrote. This is the self-evident truth of Woke America.

According to the official history taught in our schools and universities, the white man alone is guilty of crimes against nonwhite humanity. Slavery, genocide, colonialism, imperialism, and apartheid are his exclusive prerogative. Whatever accomplishments he has claimed were either stolen from people of color (as the 1987 book “Black Athena” argues) or built on their oppression (the development of America).

The cause of white evil appears to be not biological but historical. Whereas Malcolm X and the Nation of Islam taught that “white people are born devils by nature,” our Church of Diversity teaches that whites have acted and continue to act like devils. The new hierarchical racial dichotomy—white bad, nonwhite good—is based on a one-sided historical record of oppression. The horrors that nonwhites have visited upon one another or on whites are, of course, ignored.

Because whites choose to be evil, they must be held responsible for their actions and punished. “Vengeance is mine, I will repay,” saith the woke foot soldier. In this post-Christian world, forgiveness is reserved for the crimes committed by the historically oppressed. For whites, only “infinite penance” will suffice.

This new vision is not yet enshrined in our laws, and it remains imprudent for those with political aspirations to affirm it publicly. But it finds increasing expression among the woke vanguard in the academy, on social media, in the press, and among the Antifa and BLM vandals. At worst, a virulently antiwhite tweet may have to be deleted, but no one gets canceled for demonizing whites.

If there is hope, it lies in the majority of Americans of all races who do not believe this racist nonsense, who still cling to the colorblind republican creed of equal rights under equal law. They have been falsely taught to look beyond the founding to defend it, but at least the belief is not dead, however obscured its provenance may be.

In truth, the creed finds its clearest and most eloquent articulation in the good old self-evident truths proclaimed by our Founders. “All men are created equal” has always meant “all men.” And it still means all men. Nowhere in the Declaration of Independence, or in the Constitution for that matter, are people classified by race—or ethnicity, religion, sex, or any of the other categories used to pit us against one another today.

What the country needs are more Americans—the more prominent, the better—to reassert the Founders’ creed and pledge, in its defense, if not their lives and fortunes, at the very least their sacred honor.