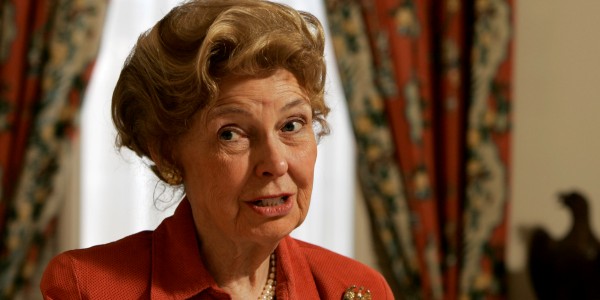 Phyllis Schlafly led the opposition to the ERA in the 1970s

The Democratic-led Virginia General Assembly voted in January to adopt the Equal Rights Amendment, claiming that as the 38th state to ratify the amendment, it should become part of the U.S. Constitution.

This despite the fact the deadline for ratification expired in 1979.

Virginia's attorney general has filed a civil rights lawsuit against the archivist of the United States, David Ferriero, to require him to recognize the vote.

In response, the Trump administration has filed a motion to dismiss the suit

The Justice Department's motion now has the support of a friend-of-the-court brief by the non-profit groups Concerned Women for America and Susan B. Anthony List, representing hundreds of thousands of American families.

They argue the "requisite number of states did not ratify within seven years of submission, so the ERA's path ended in 1979. End of story."

Opponents of the ERA point out, among other things, it would force women to register for the draft, require government funding for abortion and bolster the transgender movement's push against sex-segregated restrooms.

The brief was filed by lawyers for the Alliance Defending Freedom.

"The Equal Rights Amendment is legally dead," said ADF Senior Counsel Denise Harle. "Congress gave states seven years to ratify it, a deadline that came and went decades ago. Honest advocates for the ERA have long understood that their time has expired, and any legitimate effort to add this amendment to the Constitution must start over from the beginning. If the current campaign to illegally sneak the ERA into the Constitution is successful, the rule of law will be undermined as the Constitution’s amendment process is discarded for political convenience.

"Even long-time supporter of the ERA, Justice Ruth Bader Ginsburg, acknowledges that the recent push comes 'long after the deadline passed' and that ERA advocates should 'start over.'"

The proposal from Congress stated the ERA would be certified "as part of the Constitution when ratified by the legislatures of three-fourths of the several states within seven years from the date of its submission by the Congress."

The brief explains that over the years, Congress has tried numerous times to "repeal" the deadline.

"But these proposals have never garnered enough support. Why would an extension or 'repeal' of the deadline be necessary unless the deadline were binding? It would not, and 1979 remains the ERA's terminus," the brief states.

"This lawsuit is based on wishful thinking at best."

In fact, the Supreme Court already dismissed a challenge to the deadline extension's constitutionality.

The brief states: "This court should reject plaintiffs' request to throw out decades of settled law, their own concessions on the public record, and Article V and the ERA's plain text, and the court should grant summary judgement for defendant-intervenors states."

Virginia has argued that Congress set the deadline, so it now can change it to make Virginia's vote valid.

The brief notes CWA has been opposing the proposal since it was launched. In 1980, the group successfully challenged a decision by Congress to extend the deadline.

A constitutional amendment must be ratified by three-fourths, or 38, of the states. Only 35 states approved the ERA before the 1979 deadline and two others did after that. However, five states -- Nebraska, Tennessee, Idaho, Kentucky and South Dakota -- withdrew their ratification votes.

The Justice Department's Office of Legal Counsel argues Congress has "constitutional authority to impose a deadline for ratifying a proposed constitutional amendment."

"Accordingly, even if one or more state legislatures were to ratify the proposed amendment it would not become part of the Constitution and the archivist could not certify its adoption."

The Justice Department points out Congress "may not revive a proposed amendment after a deadline for its ratification has expired."

"Should Congress wish to propose the amendment anew, it may do so through the same procedures required to propose an amendment in the first instance, consistent with Article V of the Constitution."

South Dakota, Louisiana and Alabama have filed a federal case to block the ERA should should it be ratified, the Associated Press reported.

The lawsuit seeks to prevent the U.S. archivist from accepting a new ratification vote from a state.

The AG said it's an issue "of following the rule of law, the rules that our Founding Fathers put into place to protect us from government making decisions without the consent or support of 'we the people.'"

Rep. Doug Collins, R-Ga., has warned Congress "doesn't have the constitutional authority to retroactively revive a failed constitutional amendment and subject citizens in all 50 states to the current political trend in just one state."