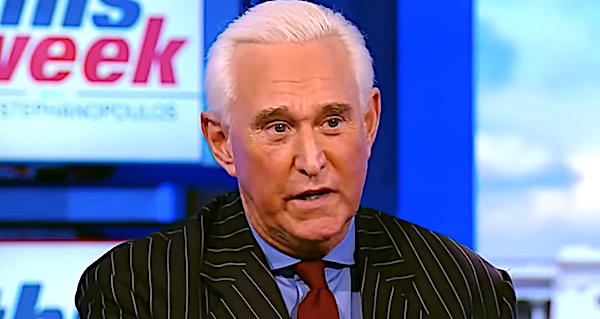 Controversy, it seems, is a constant companion of Roger Stone, the longtime political operative and friend of Donald Trump who is in the news this week because the president commuted his 40-month prison sentence in a case prompted by the Robert Mueller special counsel investigation.

Few apparently are aware, however, that the man known for his hardball politics, self-promotion and licentious lifestyle declared in an interview that he had accepted Jesus Christ as his savior and is a changed man.

Journalist David Brody reposted a Just the News interview conducted in March in which Stone recounted his conversion at a Franklin Graham rally, calling it the greatest decision he had ever made.

"It doesn't matter how grievous your sins may be, they can be washed away, if you will simply accept Jesus Christ as your savior," Stone told Just the News in a podcast interview on "The Pod's Honest Truth" with David Brody. "This is the greatest decision that I've ever made. And I'm very at peace with it."

In January, when he was "having a very hard time" dealing with the emotions of facing a prison sentence, he attended a Franklin Graham rally in Boca Raton, Florida.

A friend arranged for him to meet personally with the famous evangelist, the son of Billy Graham, before the event began.

"I kind of laid my problems out for Franklin Graham, and I asked for his help, and he essentially said, 'It's not my help you need, you need God's help,'" Stone recalled.

"He said, 'You just need to reach out to God to cleanse your sins, to receive Christ as your savior, and then you can stop worrying.'"

At the end of the rally, Stone stood up and raised his hand with others in response to the invitation to accept Jesus.

"I know I felt the calling, and we confessed our sins, and we got right with Christ," Stone said. "I was looking for some political fix, but what I was really looking for was a spiritual fix."

He said it felt like "a cement block being removed from my chest."

"I've chosen to walk with the Lord, and that has really made my burdens so much easier."

Afterward, Graham's team followed up with daily texts to encourage him in his faith and sent him a special Billy Graham Bible.

In an interview Monday night with Fox News' Sean Hannity, Stone thanked Hannity, Fox News host Tucker Carlson, Franklin Graham and others who gave spiritual support, and legal counsel and advice through his prosecution and sentencing.

Struggling with respiratory and other issues, the prospect of being put in a "COVID-infested" prison was a near death sentence, he said.

"More than anything else, I'm grateful for God," Stone told Hannity.

He recalled Hannity giving him counsel in an email to "rededicate his life to Christ and be reborn."

"Your advice was as solid as can be. You said God will never desert you, he will never abandon you, he will protect you if you confess your sins and you walk in his way," Stone said.

"And I have done my very best to do that."

'The old Roger Stone would have been angry about that'

In the March interview with Brody, Stone said he now spends every day in prayer and Bible reading.

"I never really realized how practical the Bible is. "This is not just some history book," he said. "It doesn't matter what your situation is. There's solid practical advice throughout the Bible, regardless of what problem you're dealing with."

Well aware of his past and how people perceive him, he acknowledged many will be skeptical and say: "You know, Roger Stone, the guy's a showman, he’s a political animal. This is a pose. This is a head fake. This is posturing to gain public sympathy."

He said "the old Roger Stone would have been angry about that."

"But I'm not angry because I really believe that He, God, knows what's in my heart," Stone said. "He knows whether my conversion back to my faith is real or not, whether it is honest or not. And therefore, I'm perfectly at peace. With those who want to scoff, scoff. It does not bother me."

Stone said his calling, now that he has devoted his life to Christ, is "get back to trying to save this country."

He believes President Trump also is "a changed man."

Stone said Trump "was put in place by God at the right time for the right reasons."

"He ran because he wants to do something, much like Ronald Reagan [did]. He didn't run because of himself. He ran because of us. And that's why I believe that he was placed there by God to save this country."

Stone acknowledged to Brody that his story and Trump's may one day wind up in Ripley's museum of Believe It or Not.

But that’s the beauty of God's saving grace.

"Everyone can be redeemed," he said. "That's the most important lesson of the Bible.”