Ford CEO Jim Hackett firmly rejected a request by a group of black and white employees for the automaker to stop making police cars.

The employees opened their letter to Hackett and Chairman Bill Ford declaring, "Throughout history, the vehicles that Ford employees design and build have been used as accessories to police brutality and oppression."

The letter was first reported by Jalopnik, a news and opinion website on the transportation industry. 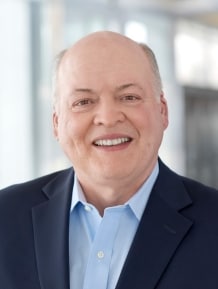 "We know that while many join, support or supply law enforcement with good intentions," the employees wrote, "these racist policing practices that plague our society are historic and systemic -- a history and system perpetuated by Ford for over 70 years -- ever since Ford introduced the first-ever police package in 1950."

Asking for action by July 15, the employees concluded that as an "undeniable part of that history and system, we are long overdue to 'think and act differently' on our role in racism."

Ford sells more police vehicles than any other automaker in the nation.

Hackett responded with an internal memo arguing it's "not controversial that the Ford Police Interceptor helps officers do their job."

"The issues plaguing police credibility have nothing to do with the vehicles they're driving," he said.

"By taking away our Police Interceptors, we would be doing harm to their safety and making it harder for them to do their job."

The present "unfortunate circumstances," the CEO asserted, "present Ford with an even greater opportunity to not only innovate new solutions but also leverage our unique position to support the dialogue and reform needed to create safer communities for all."

The employee letter said "resources can and should be diverted to other forms of first response and public safety."

'Violence with bicycles is unacceptable'

Other suppliers of police departments have come under pressure to divest, such as Trek Bikes and Amazon.

Amazon, The Guardian reported, has put a "Black lives matter" banner at the top of its home page, but activists say it means little if the company continues selling its facial-recognition software to police forces.

Trek Bikes were spotlighted on social media in photographs and videos of police holding up their bikes to control crowds during Black Lives Matter protests, Forbes reported.

Fuji, meanwhile, has withdrawn from the police-bike market, saying, "violence with bicycles is unacceptable."

Trek updated its blog June 10 with news that it would "address systemic racism."

It plans to "invest $2.5 million over ten years in a new retail management and bicycle mechanics training scholarship program to provide a career path for 1,000 people of color to improve diversity within Trek Headquarters, Trek retailers, Trek stores, and the entire cycling industry."

And all Trek employees will be required "to complete diversity and inclusiveness training provided by accredited external resources by the end of 2020."

The family-owned Wisconsin-based business reacted to the calls on social media to end its police contracts.

"Recently we have seen photos and video of Trek bikes that have been used by police in ways that are abhorrent and vastly different from their intended use," the company said in a statement. "For over 25 years, we have seen police on bikes, out of cruisers and offices, building relationships in the neighborhoods they serve.

"The past two weeks has turned the view of police on bikes from a community asset to a liability. A positive outcome of the recent protests is that we are starting to see real police reform being discussed at local and national levels. We believe bikes can play a positive role by continuing to get officers out of cars and armored trucks and into the community where trust can be built."